Both ups and downs for the Lady ‘Cats 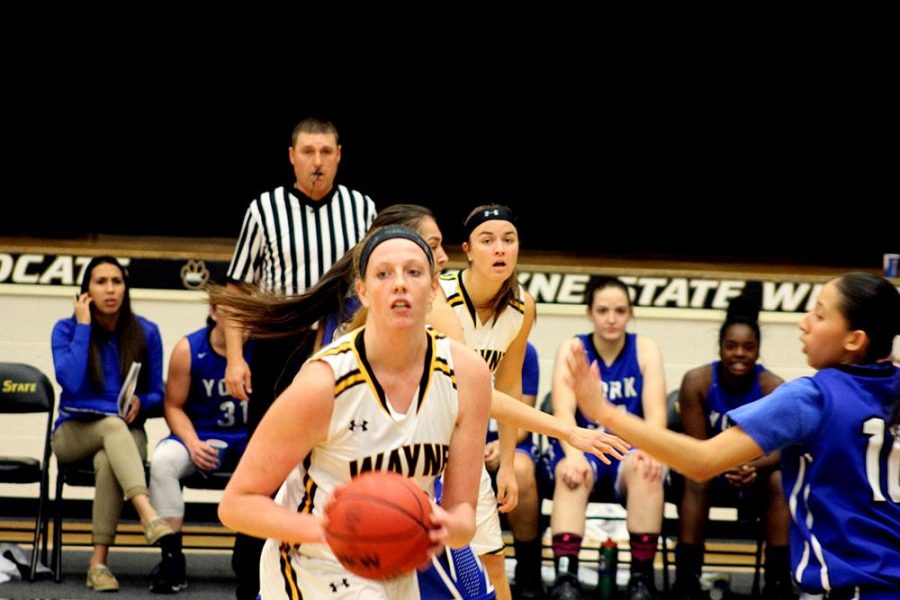 Redshirt freshman Taylor Reiner goes for a shot in the 112-48 blow out against York College on Nov 19.

In their four games over Thanksgiving break, the Wildcat basketball women found success at home, but found the road a tough place to be.

WSC split four games and enters December with a 4-2 record.

WSC’s Anna Martensen recorded a double-double, but that was not enough to stop Rockhurst College, which had 11 three-pointers on Wednesday Nov. 18 in Kansas City. The Wildcats lost the game, 68-64.

WSC went cold in the second quarter. While making only two baskets, WSC held onto their 35-32 lead at half time.

The ‘Cats let their lead slip away in the third trailing 47-46 at the end of the quarter.

The fourth was a battle. The ‘Cats took the lead back briefly, but then Rockhurst regained the lead and never trailed in the last six and a half minutes.

Paige Ballinger led the team with 23 points, while Martensen had a double-double with 13 rebounds and 10 points.

“These players just need to focus and get better each day,” Coach Chris Kielsmeier said. “That needs to be the biggest thing we are worried about. I am a firm believer that if you get better every day, you will be pretty good at the end of the year.”

The Wildcats scored early and often, starting the game on a 14-0 run and eventually ended the first quarter 31-9.

Fifteen of the Wildcats’ 23 second quarter points came from non-starters. At half time the ‘Cats led 54-22.

During the second half the reserves got some valuable court time. The Wildcats ended the third quarter ahead, 81-34, and finished with a 64-point win.

Haley Moore led the team with 17 points, while Taylor Reiner, Sadie Murren and Ballinger all had double figure points.

On Nov. 23, Maggie Schulte had a career high 23 points to go along with 11 rebounds to help lead the team over Augustana University, 70-58. During the NSIC battle, WSC did not trail.

In the first quarter, five different Wildcats scored, giving WSC an 18-15 lead after one quarter of play.

The second quarter was again close, but the ‘Cats closed the first half with a 38-31 lead.

The second half started off tight, with Augustana going on a 9-2 run tying the score up at 40, but WSC pulled ahead and never looked back. At the end of three, the score was 52-46.

The fourth quarter saw the Wildcats outscore the Vikings, 18-12. Six straight free throws with less than 1:30 left sealed the win for WSC.

Schulte led the team in both points and rebounds.

On Saturday, WSC’s women’s basketball team was handed its second loss when the Wildcats were beaten at the University of Nebraska-Kearney, 76-59.

“We aren’t taking care of the ball, which is costing us possessions. We are just making too many mistakes defensively,” Kielsmeier said. “We are very inconsistent with both of those, and they need to get better quickly.”

The Lopers extended their lead to 38-29 by the end of the first half.

The Lopers continued to dominate into the second half, scoring 25 points, allowing WSC to score only 16. At the end of three, the score was 45-63.

WSC sharpened up its defense in the final quarter, only allowing UNK to score 13 points, while scoring 14 of their own.

Schulte scored a game-high 21 points and team-leading nine rebounds to lead the Wildcats.

“We didn’t play very well in either [loss],” Kielsmeier said. “It’s only six games, but we are 4-0 at home and 0-2 on the road. It’s too early to say we are a team to that will struggle on the road. The sample size is small, but we need to get better.”

WSC will tip off again on Saturday and Sunday in Rice Auditorium when Concordia-St. Paul and Minnesota State-Mankato come to town.