Sharing a secret with PRIDE 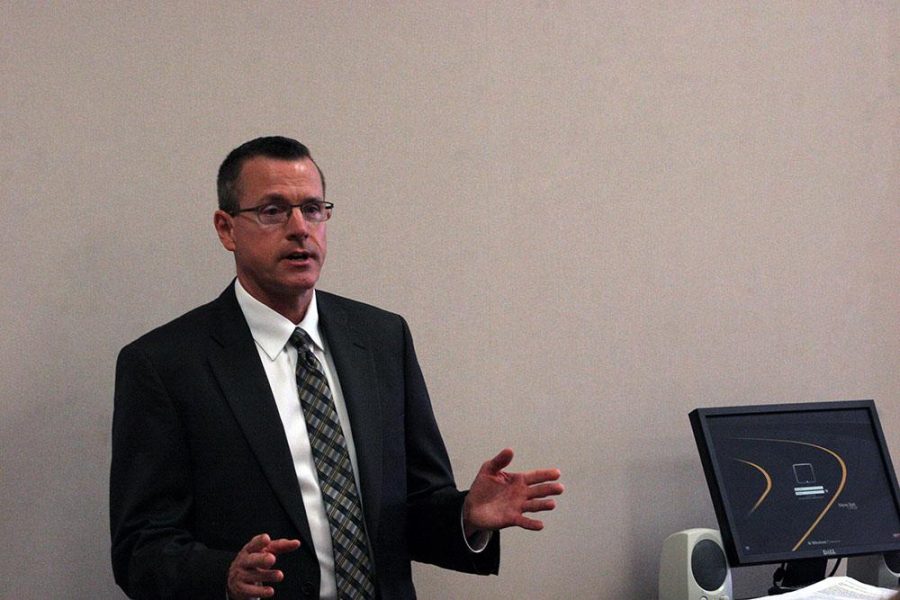 Ron Holt talked to WSC Students about the stuggles of being a man in the LGBT community and keeping it a sectet.

A prominent clinical psycholo­gist and Wayne State graduate talked to students on campus last week about his persecution as a closeted gay.

Dr. Ron Holt, a 1989 WSC grad, discussed various LGBT issues on Wednesday and Thursday. Holt travels to college campuses around the country to address such issues, and he returns to Wayne every fall.

Holt described what life was like for an LGBT individual based on many interviews and his own personal experi­ence.

“I waited to come out until I was a medical student in Kansas City because I was scared I would get kicked out of the house,” Holt said. “If you know someone struggling with being clos­eted, you should never force them out.”

Holt explained that the LGBT community is at a much higher risk for drug abuse because of the lack of empathy and stigma towards them.

“Between 18 months and 5 years is when kids develop their gender identity,” Holt said. “This is the point where kids are really starting and trying to understand themselves and their body. Sexual orientation is discovered from the age of 9 to 13 years old.”

Oct. 11 is celebrated as Na­tional Coming Out Day.

“Sex is the body, gender is the mind.” Holt said.” People need to understand the difference between sex and gender.”

Holt explained that sex refers to the body you were born into, either male or female, whereas gender is what society deems as masculine or feminine. Gender dysphoria occurs when someone is born into the wrong sex.

During his presentation, Holt divided the audience into groups, making it a very interactive expe­rience. Each group was given a different case study to read from and answer questions about.

The case studies focused on the issues people face when dealing with being closeted when they want to come out, or just being confused about their bodies in general. Ac­cording to Holt, it is possible to be born with the wrong gender.

“The most important concept to walk away with is the difference between sexual orientation and gender identity,” Holt said.

According to Holt’s website, sex­ual orientation is a person’s sexual identity in relation to the gender to which they are attracted: hetero­sexual, homosexual or bisexual. Gender identity is the gender you identify with.

“We put people in boxes and this is exactly why we need to be advocates for others.”

The Ron Holt Civic Engagement Award is awarded to students making an impact to the campus and community. To learn more about Holt and his message, visit his website at audacityofpride.com.