‘It’d be like taking part of a painting away’ 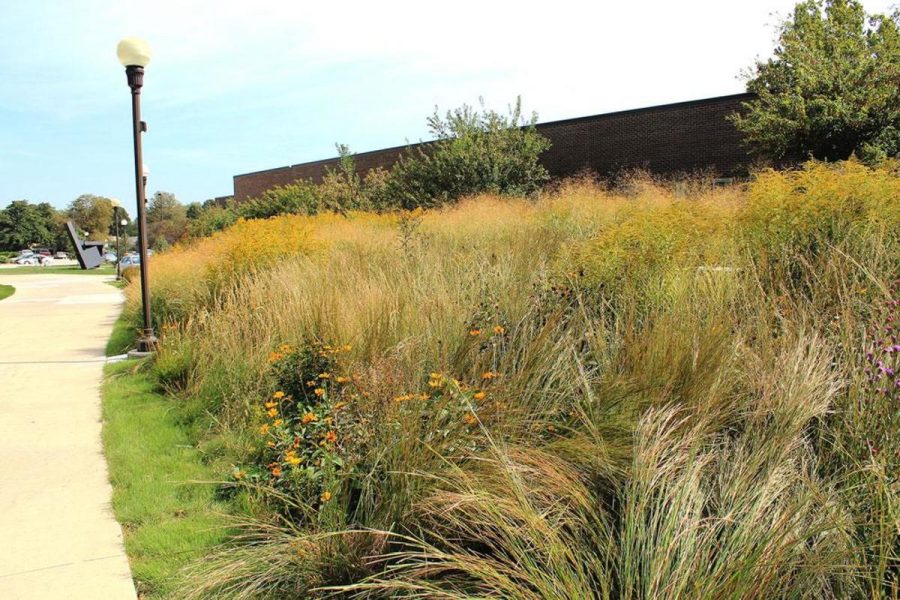 A plan for new landscaping in front of Benthack Hall of Applied Science is being brought to WSC’s Beautification Committee by a donor in hopes of making it more “attractive” to passersby.

It would be hard not to notice the prairie garden in the commons. It’s that seemingly chaotic slough of wildflowers and natural tall grasses that line the sidewalk north of the Benthack Hall of Applied Science.

But not everyone sees it in the same light.

At a meeting Monday between President Marysz Rames, members of the Wayne State College Foundation staff and a few remaining members of the dwindling WSC Beautification Committee, a request from a WSC donor to change the landscape of this prairie garden was brought up for discussion.

The donor had been working with WSC’s former president Curt Frye, before the change in presidency, to donate money towards campus landscaping in an effort to make this area, specifically the east side, more “attractive.”

The WSC Foundation has received plans from Country Nursery, here in Wayne, to remove completely, or partially, the native prairie vegetation on the eastern half of the commons ‘island’ and replace it with a fescue lawn (good old cool season lawn grass, the kind you might see in the Jones’s backyard).

Armstrong, the Director of Planned Giving, as well as Phyllis Conner, the Vice President of Development, were two Foundation staff members that attended the Monday meeting. Conner attended as a member of the Beautification Committee.

But now there is some opposition to the plan, especially from the WSC Beautification Committee.

“It’s part of something larger,” Dr. Mark Hammer professor of biology and Beautification Committee member, said. “It’d be like taking a part of a painting away.”

Since J.G.W. Lewis Drive, the street that used to run east to west through the WSC campus, was taken out, a lot of work has gone into developing the commons area. WSC is part of the Nebraska Statewide Arboretum, and it had a lot of input in the prairie garden.

Arboretum/landscape manager Kim Schramm has put a lot of effort into establishing this native planting, planting in the spring as well as cleaning out and managing brush each fall.

“I think it’s sad that it would go,” Schramm said. “Because it represents a part of the heritage of Nebraska and the Midwest.”

Country Nursery has commented on the garden, saying it was the best looking native planting that they had ever seen.

A number of faculty and staff members have voiced their concerns that they don’t want to see the prairie garden go.

“I’m distressed to hear that the prairie grasses and flowers in the commons are in jeopardy,” reference librarian Charissa Loftis told the Wayne Stater. “It took a while for them to grow on me, but one day, as I walked by, I saw thousands of butterflies of all kinds. At that time I thought, ‘This is the reason we have this.’ I’ve been sold ever since. Do we really need more plain ol’ grass?”

“The flowers attract many butterflies and provide an interesting contrast to the rest of the monotonous green lawns on campus,” Counseling Center director Lin Brummels said.

According to Hammer, President Rames said at the meeting that she has heard complaints about the planting from some faculty and a parent of a student.

Allergies and a multitude of different insects are the common complaints.

Hammer also said that some people in Benthack Hall don’t like the garden, think it obscures the building and that it promotes allergies. However, Hammer said that the plants growing in the commons are not the type that induce allergies.

“Some people associate ‘showy-flowers,’ like golden rod, with allergies, but that’s a misconception,” Hammer said. “It’s the plants that are wind pollinated, like ragweed, that are causing the fall allergies.”

Those wind-pollinated plants have not been selected and planted in the garden.

“I like it, it’s pretty cool,” said passerby freshman Dylan Higgins, a computer science major. “It’s supposed to be all natural, isn’t it? It’d be better like this instead of just grass.”

“Nothing is definite yet,” Rames said. “I really want to make sure that all feedback is heard.”

She has just recently become aware of the Landscape Master Plan that was developed in 2001, which includes the prairie garden. This is a plan that still has wide support from faculty and Beautification Committee members.

“I want to visit more with the Beautification Committee and have more dialogue,” Rames said. “I think that it’s great that there is so much support for the natural grasses on campus.”

She said that another meeting is planned for early next week, though an exact date and time have not been set.

“It’s, I guess, an acquired taste,” Hammer said. “It’s a little unkept, you know, because it is, but to me, this is a learning campus. It’s an example of sustainability. It’s an educational experience. It’s a nice focal point that exemplifies our native landscape and provides a unique feature to the campus.”