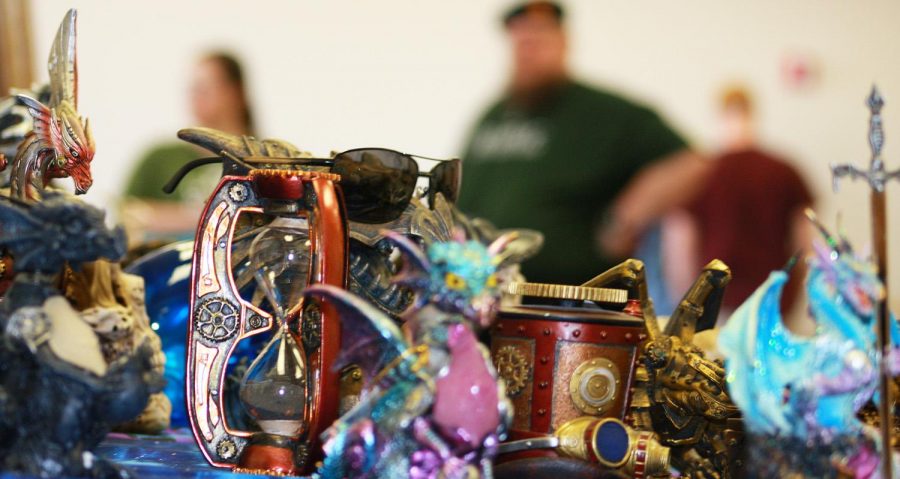 Artwork and trinkets were on sale to all those present at WillyCon XVII on Wayne State’s campus.

Every spring for the past 17 years, WillyCon has been the gathering place for current members and alumni of the Sci-Fi Fantasy Club.

This was a special year for the hosting Sci-Fi Club, however, because a record number 303 participants registered for WillyCon. That’s over 50 more than last year’s record registration number.

WillyCon plays host to guest writers and artists who make a living doing what they love—writing and creating fantasy works. This year’s author guest of honor was David Weber, author of over 16 fantasy novels. The artist guest of honor was Betsy Mott.

Just as there are always guests of honor, every con has a vender’s room. Students save up for weeks and months to buy the artwork, fandom merchandise, weapons and other crafty wares the dealers supply.

It’s not uncommon for some con goers to spend anywhere from $50-$300 between the vender’s room and the companion auction.

But that doesn’t deter Sci-Fi alumnus and recent graduate Tim Steele from venturing in, year after year. In fact, he encourages new participants to check it out.

“If no one’s ever checked out WillyCon, I would encourage them to at least check out the vender’s room and their awesome fantabulous wares. You never know what you will find,” Steele said.

But it’s not all about the merchandise. The venders themselves are incredibly generous and interesting individuals. For helping catalogue, inventory, tear down and load up the wares, Steele was richly rewarded.

“I enjoy some of the smaller things. After my panel, I had an hour-long discussion with some out-of-staters. It’s always fun to meet new people who have similar interests as you. Having so much in common with someone you just met is always a good experience,” Carriere said.

WillyCon has more going for it than interesting panels, games, tournaments, food, venders and a chance to touch base with fellow nerds.

It offers fans the chance to dress up in costume to show their pride for their favorite books, TV shows, movies, animes, web-comics and games.

“My second favorite part is the costumes,” Carriere said. “Some people put a lot of effort into it. Some are new to it, but you can tell they’re excited about it, and that excitement is very genuine—which is funny because they’re dressed up as someone they’re not—but it’s just about being genuine and unembarrassed about something that you love.”

Con-goers dress up in elaborate homemade or online-bought costumes of their favorite characters. At WillyCon and around the Student Center, weird looks are rare, as appreciative nods and outright fangirling are more common. Outside the con, however?

“Yesterday, I ran into Shopko in costume and received some funny looks,” Carriere said about the day she was “full-on gray-paint Terezi,” complete with red cape.

Sci-Fi Club alumni and recent graduate Melissa Huddell and upcoming August graduate Gena Andersen were impressed by the creativity of the con decorations and of the minions’ skit during opening ceremonies.

“The opening ceremony was really good this year. You could tell they rehearsed it a lot. You could tell people were following their cues and it was very well executed,” Andersen said.

“They also actually decorated this year with hand-painted signs for all of the rooms,” Huddell said, “which I thought was really nice.”

But skits and decorations aren’t the only things these returning members admired about the con. What they enjoyed most was the freedom to wander and explore all the different events as they were no longer responsible for helping with specific areas.

“Coming back, you have the freedom to meet up with old friends and make new ones. You’re not tied down being a gopher and helping out,” Huddell said.

“It’s nice to not have to be directly in charge,” Andersen agreed.

Instead, they had time to enjoy their favorite panels. Huddel enjoyed the “Wizards, Witches, Muggles, OH MY!” “Harry Potter” panel. While Anderson enjoyed “Shut up Nurse!” a panel about YouTube sensation Markiplier.

No matter what keeps fans coming back year after year, whether it’s the laser light show at the planetarium or the Boffer Tournament, WillyCon is always a fun and memorable experience for all who attend.

Students are encouraged to see what all the rage is about next year while their admission is still free as a WSC student.

Until next year, in the words of Steele, “All hail Supreme High Lord Chancellor Ron Vick.”