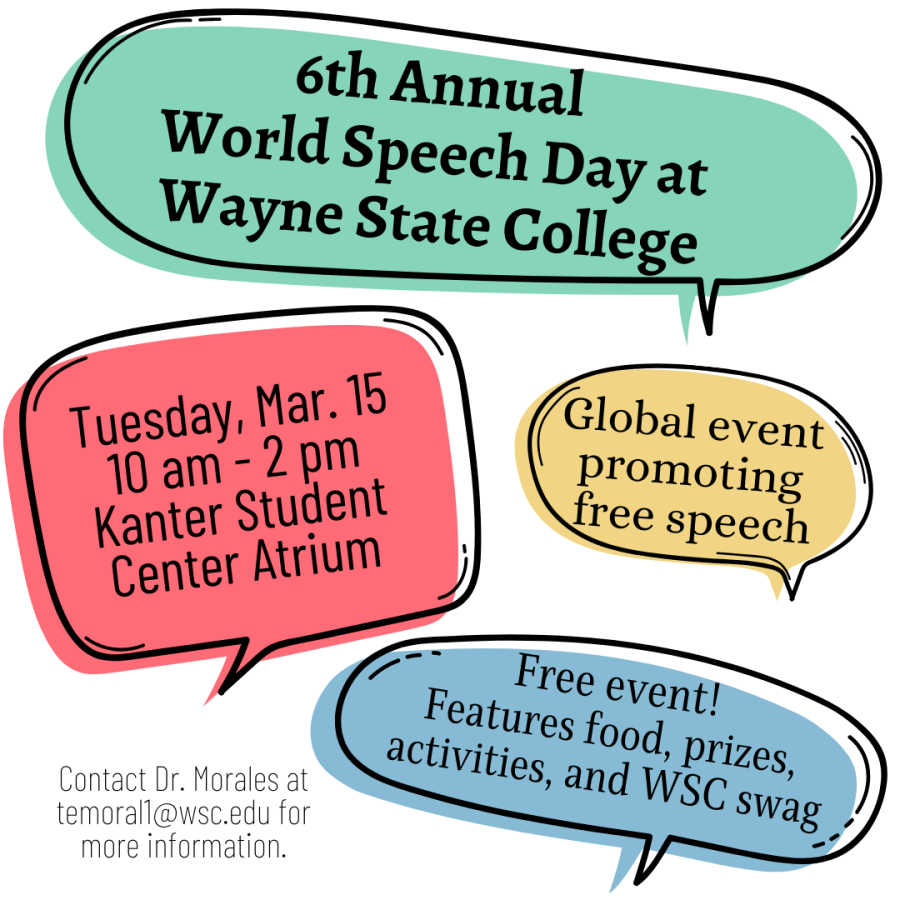 Wayne State College will be hosting World Speech Day on March 15 in the Student Center Atrium from 10 a.m. to 2 p.m.

The global event is being led by the WSC argumentation classes, under the direction of Teresa Morales, in collaboration with the WSC Student Leadership Club. The event is free and welcomes college and high school students, as well as community members. It will also be live streamed on Facebook for those who cannot be there in person, Morales said.

This will be the sixth year that Morales has been involved with World Speech Day at WSC, with her originally joining the celebration back in 2016.

“The idea is for people to use their voice as a means of power to let the world know that there are other voices to be heard and listened to, other than the same, loud hegemonic ones,” Morales said. “People’s voices are their tools of power.”

She also highly encourages international students to come and talk about their cultures and what they understand about Americans.

“I strongly encourage all kinds of people who feel like they are not the voices typically heard to come,” Morales said. “This is their open mic chance to be heard.”

Speakers will have the chance to present anything they’d like, with the speeches lasting at least two minutes. There will be a sign-in sheet at the event, where people wanting to speak can put their names.

The purpose of the event is for people to use their voices and be heard. Morales said that people shouldn’t be afraid to stand up and talk. Instead, they should feel empowered. For those having trouble producing topics, there will be a spinning wheel with ideas they can use. If uncomfortable speaking, attendees will also be able to write thoughts on sticky notes and post them on a wall during the event.

Eli Reiter, a junior who presented at last year’s World Speech Day event, said that the event was great and very impactful.

“The World Speech Day event was important because it gives not only a platform for students to voice their thoughts about any topic of their choosing, but a platform that actively encourages them to do so,” Reiter said. “In an increasingly divisive culture, it is essential that we have forums for students to voice any ideas freely. In a sense, the World Speech Day event is the end of our educational goals at Wayne State College: to be intellectually thinking individuals who have the virtue to cultivate and articulate their thoughts for the betterment of themselves and others.”

He also said that the event was fun to participate in, especially because of the range of topics and how you can talk about whatever you want and see others do the same.

Hunter Schilling, a senior who is part of Dr. Morales’ Argumentation class, said that he was also excited for the event and thinks it is important for students to partake in.

“Everybody getting together from different ethnicities and getting to learn about their lifestyles is what I’m looking forward to the most,” Schilling said.