What is Quality Stone Produce? 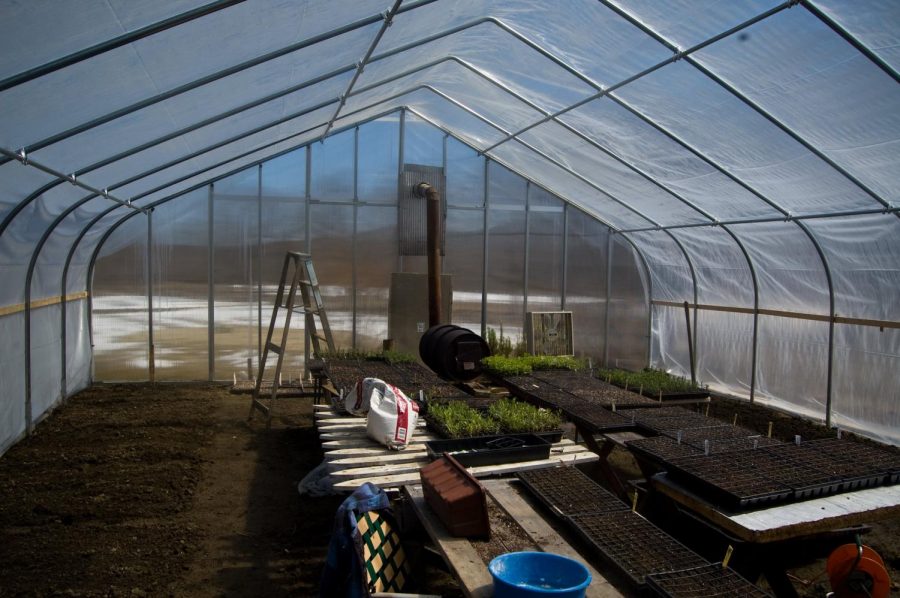 “Greenhouse Interior” by bert_m_b is licensed with CC BY 2.0. To view a copy of this license, visit https://creativecommons.org/licenses/by/2.0/

With spring and the planting season just around the corner, producers are preparing their fields and greenhouses for the 2021 season. Small-town farmers and producers are the heart of Nebraska.
Garrett Stone, a small-town business entrepreneur, owns and operates Quality Stone Produce with the help from his family. Garrett and his younger brother, Dusty Stone, both pitched in money and resources to buy their first greenhouse in 2018.
Garrett said their first greenhouse was 30’ by 72’ and was the basis of Quality Stone Produce of Harvard, Nebraska.
Currently, Quality Stone Produce has one seed starter greenhouse and two all-season greenhouses to be able to produce a variety of vegetables.
At the beginning of this business endeavor, the Stone brothers said they spent a lot of time prepping the soil and setting up their systems and cleaning up the previously owned greenhouse.
Quality Stone Produce sells a high percentage of their produce at farmers’ markets on the weekends in Hastings, Nebraska, and Sutton, Nebraska. The Stone brothers also sell their high-quality produce to Sutton locals and to residents of the surrounding small towns.
Stone estimated their profits for the 2020 season was about $500 at each farmers’ market during their typical season. This profit margin is “easily expandable by having enough high-quality crops to sell,” Garrett Stone said.
The idea of Quality Stone Produce began when Stone was in his high school horticulture class and through his involvement as a member with the National FFA Organization.
His high school, Sutton Public Schools in Sutton, Nebraska, has a greenhouse on the premises and has incorporated the greenhouse into their academic curriculum. After high school, Stone went on to study at the University of Nebraska–Lincoln (UNL).
Stone said as a freshman he studied “agronomy but soon switched as I wanted to learn more about the other crops that I could grow in Nebraska.”
From the idea of a high-quality produce business to actually implementing his ideas, Stone has seen some setbacks throughout his journey. At the beginning of the 2020 season, with the pandemic and everything, the Stone brothers had a late start to planting their crops.
Stone said they also had trouble with their big tomato varieties not setting. Another setback was an infestation of aphids towards the end of the 2020 growing season which impacted their yield potentials.
Stone said the aphids “forced us to spray insecticides which we [ultimately] decide[d] to just rip out a lot of the crops.” With the pandemic, the U.S. saw more people eating and cooking at home so a demand for fresh produce was an accurate response.
According the 2021 Consumer Price Index (CPI) by the U.S. Department of Agriculture (USDA), food prices are up 3.8 percent from January 2020.
The USDA’s Consumer Price Index (CPI) also reports a 3.7 percent increase since January 2020 for food-at-home (grocery store or supermarket food purchases) and “are expected to increase between 1.0 and 2.0 percent.”
The increased demand for fresh produce has been observed first-hand by Quality Stone Produce. The pandemic has hit producers hard but Garrett saw a “huge demand for fresh produce at the market”.
According to Stone, during the 2020 season, Quality Stone Produce had a variety of produce, including three different types of cherry tomatoes, multiple varieties of beef tomatoes and lots of leafy greens.
Some of the leafy greens the Stone brothers grew include spinach and lettuce and a variety of peppers and squash.
Stone said the business’s short-term goal is to start growing lettuce and other cold hardy crops year-round and this is achievable as he added another all-season greenhouse to his collection.
His long-term goals are to expand the business into grocery stores and purchase a few hoop houses to boost production yields and variety.
This past month, Stone said he began seedlings in his seed starting greenhouse and will plant lettuce and spinach “every two weeks throughout the season for a continuous supply.”
With a homemade irrigation system, built by Stone, made from a tank of water and a timer, he is able to gauge moisture levels and accurately water the plants every two to three days (depending on the weather and crop types) to minimize waste.
He said he is also able to fertilize through his irrigation system but uses as little fertilizers and pesticides as possible.
Instead, he said he uses “compost and organic fertilizers that you can buy and with my new greenhouse we are investing in some beneficial insects, like assassin beetles, which will eat the insects we don’t want in the greenhouse.”
The all-season greenhouses consume a fair amount of energy with the AC unit in the summer and heater in the winter.
Stone estimated the electricity and gas bills add up to about $300–400 per month but the operation prices are far lower than the income from farmers’ markets. Quality Stone Produce plans for another successful season.