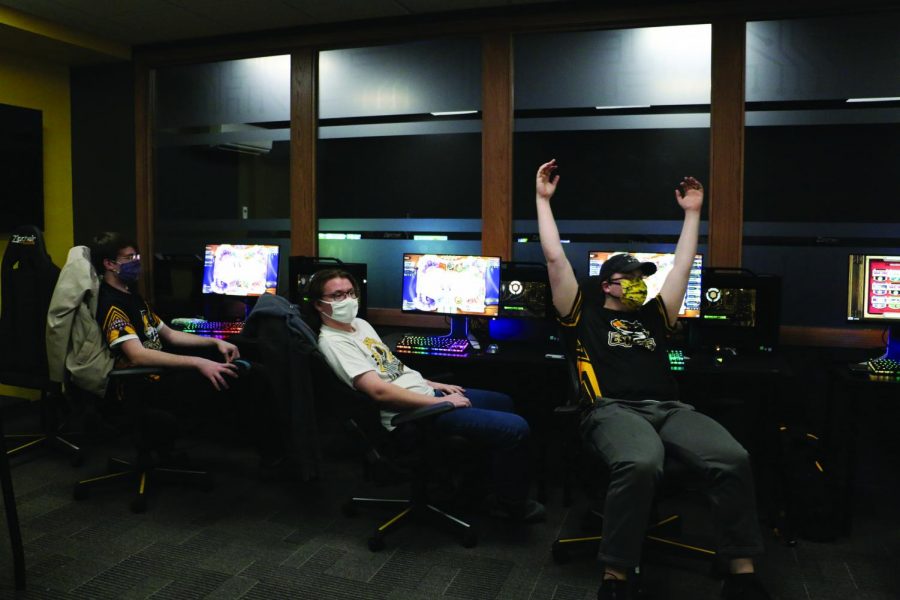 John Vuchetich (left) and Greg Down (middle) look on as Harley Lalley (right) throws his hands up in victory.

Esports made its presence felt at Wayne State College, and their success has only just begun.

The newly established esports teams are ready for another season. In the fall of 2020 Wayne State College welcomed esports into its program. In that season they took home strong ranks in the conference with the highest finishes of Rocket League and Super Smash Bros in second place. The program is led by esports coordinator Nick Sutton.

“We really are pushing to place higher this season,” Sutton said. Each team is looking to make a push deeper into the playoffs this season. Both Valorant teams placed respectively in the top eight and both Fortnite teams in the top six.

Sutton is living the gamer’s dream. He started as a pro player and now has progressed to running an organization.

“To get this job as my first job out of college was amazing!” Sutton said. Gaming has become a career path for many, and the growing community has made it to Wayne. Sutton also works with Wayne High School after students showed interest in esports when there was news of WSC’s new program. He is coordinating their teams as well.

The team has competed in the Eastern Collegiate Athletic Conference (EACAC). The conference has 75 teams, so the competition is strong, he said. Many separate tournaments haven’t taken place due to the pandemic but they did compete in the Norfolk LAN Party in early January. The WSC teams took home championships in Rocket League, Valorant and Fortnite. Wayne State College may host the party in the near future.

“We hope to expand The Den and have our own designated arena in the near future,” Sutton said. The arena would have room for spectators, broadcaster and more stations for players. The Den was a great addition, but the growth of the program may call for another addition.

Esports had 16 new students join their teams this season with about 60 students total trying out. These students fill out the two Rocket League teams, two Super Smash Bros. teams, three Fortnite teams, two Overwatch teams, a League of Legends team and the Hearthstone team. Each of these teams practice almost every day.

Conference games happen throughout the week Monday through Thursday. Each of those games are streamed for free on twitch.tv/wscwildcats. The teams just had their first games of the season on Feb. 1.