Anna Fleecs carries the ball against her opponents

The women’s rugby team defeated Notre Dame 61-0 in an all Division I competetion to win the Iowa Hawkeye Classic Tournament on Feb. 15.

“Playing with them [Notre Dame] in the championship was really cool because our coach was very excited and energetic about it and so were we,” Brook Hoesing, a fly-half, said. A fly-half orchestrates the attack and defense of a team.

“Defeating a well-established program such as Norte Dame is monumental for a school of our size,” Darrin Barner said.

Barner is the head coach for both the men and women’s rugby programs at Wayne State. WSC rugby is part of the National Small College Rugby Organization and plays at the collegiate level.

“It was really awesome because this tournament is actually a DI qualifying tournament, so one of those DI teams who ever won, they get an automatic qualifying to the DI nationals, but we won it,” Hoesing said. “It was kind of funny because…we won it and I don’t think they were expecting that at all.”

Hoesing is a junior majoring in respiratory therapy at WSC who plays in both fall and spring seasons.

Barner said Minnesota was a Sweet 16 team and Davenport has a massive funded program. Last year the ‘Cats played so well, they asked to move up in the tourney and the officials let them, so that is why they played in a DI tournament and not collegiate level.

“The upperclassmen have tremendous leadership skills and the underclassmen are extremely dedicated to the team, it’s their personal dedication to each other, and is simply unmeasurable,” Barner said. “It’s things like this that make us the number one team in the nation.”

Barner said the team has had rock solid momentum ever since putting 1,000 people in the seats for a Thursday night game and their big win against the Canadian team from Brandon University last October.

“We’re looking forward to the rest of the season and challenges by pretty large schools and victories like this certainly opens the eyes of high school athletes that want to be in a program that has won 11 national titles and going for our twelfth,” Barner said.

The team will travel to Oklahoma to play against more varsity fully-funded teams before spring break and later in the semester will travel up to Notre Dame to face them again.

“It’s always a big challenge because more funding for them means better practices and recruiting people,” Hoesing said. WSC’s rugby season will come to a conclusion in late April and the national championship will be played in North Carolina. 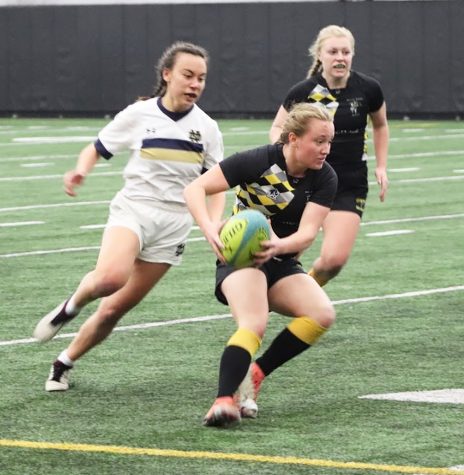