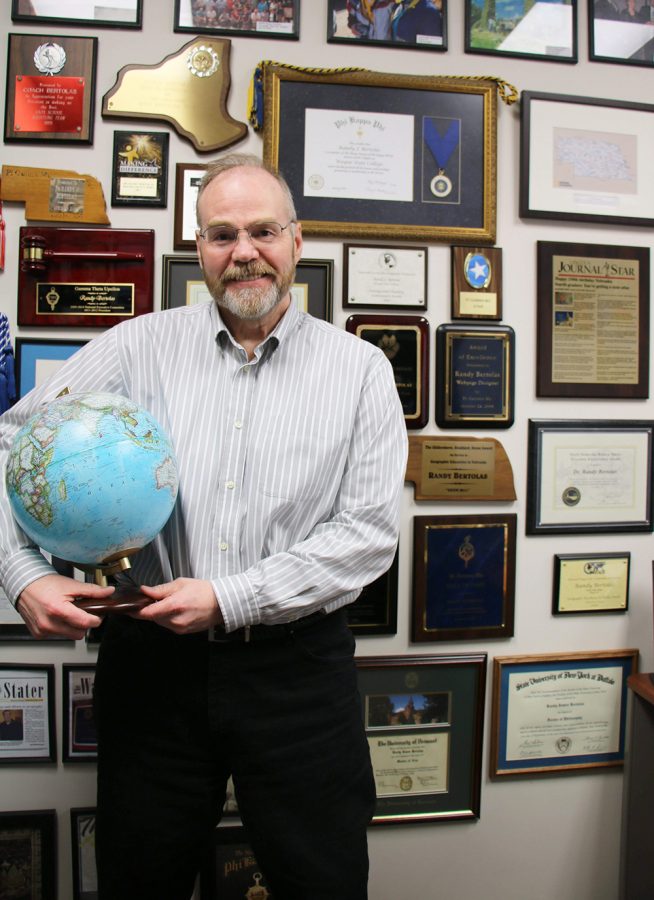 Dr. Randy Bertolas loves maps. As a child, he would read maps when others read books – or didn’t read at all.

“The maps, they talked to me,” Bertolas, a Wayne State College geography professor, said.

Bertolas said he grew up in a mining town in Minnesota. His family lived behind dumps. He and his friends would play as if they were climbing the Himalayas Mountain’s or they would go to the dug-out pit nearby to learn how to swim. He spent much of his time imaging travel and exploration of other places.

Bertolas said his family wanted him to be a doctor or own a business.

“When I was 19, I knew what I wanted to do with the rest of my life,” Bertolas said. “I wanted to travel to exotic places, and then come back and get paid for explaining things to people.”
Bertolas said when he first went to college, he took pre-med courses as his father wanted him to be a doctor. He found out he didn’t really have the desire to be a doctor or go to medical School, so after his first year of college he decided to switch.

He talked things over with his first-ever professor and switched his major to geography. Later, he was offered a chance to attend graduate school, then moved on to substitute teaching.

“Finally, I went to get my PhD and long story short, I ended up here and have been at Wayne State College the last 25 years,” Bertolas said.

Bertolas said he wanted to stay in the Midwest and teach, so he decided that WSC was the perfect fit.

“The students and faculty here is second to none, which is why coming to work makes it a lot easier,” Bertolas said.

Walking into Bertolas’ office, visitors can see photos of students on the wall.

“If you notice the pictures on the wall, these are the students and the trips, conferences that I want to remember,” Bertolas said.

Bertolas said his colleagues make working at Wayne enjoyable, but it’s mostly the students that walk into his office and ask for help or just want to have a conversation, that make it worthwhile.