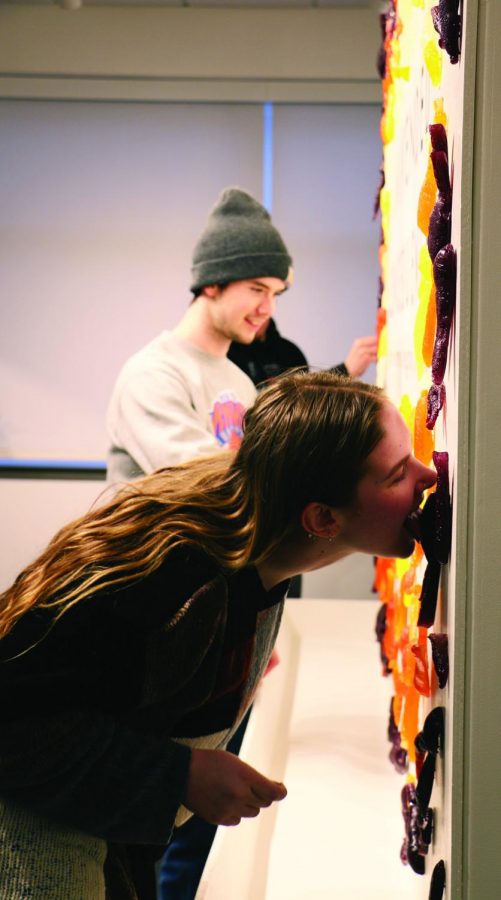 Professor Andy Haslit, who coordinates the gallery schedule, assures that artists have the necessary tools and teaches the art majors how to run shows.

“I’ll set up the gallery schedule eight to 12 months in advance and its three shows this semester and every semester it’s one visiting artist,” Haslit said. “They’re in the place of the visiting artist this year.”

Shows at the gallery have featured numerous art pieces before, but this might be the first time many people at WSC see two collaborating professors.

“We always do a faculty show and usually each professor brings in what they are working on, and they’re not really coordinating with themselves,” Haslit said. “This is the first time I see an actual collaboration where there are not two people in one space, it’s one show that’s fully both people at the same time. It was Meghan and Sarah’s idea.”

“We have been wanting to put a two-person exhibition together for a while, and we thought that using the Nordstrand Gallery might be a great opportunity to get that exhibition started,” Lemmon said.

Lemmon explained that before the exhibit, the professors set up rules about the art itself and how it was to be structured. First, the artwork would have to be different from any already seen at WSC.

“We would choose work that was already made, but it must coincide with the theme of the show: “Unintended Consequences” in some way,” Lemmon said. “We had to make one fully collaborative piece, the main title wall, “Lick and a Promise.” We each had to trade an in-process work of art for the other to finish it and exhibit it.”

The name of this collaborative exhibit, “Unintended Consequences” stemmed from human intention not always going as planned, according to the pair’s exhibition statement. The artwork was the outcome of human behavior in this project and in several aspects of life.

“All of the work in the exhibit plays on action and consequence, whether it is immediately visible or deeply embedded in the imagery created by the artist,” Lemmon said.

In this art exhibit one prominent piece is the wall that welcomes guests to view the inside of the gallery. “Lick and a Promise” was also a favorite of Lemmon.

“I was really happy with the overall exhibition, but I think the title wall really made it stand out,” Lemmon said. “It was also a piece that Meghan and I really approached in a 50-50 way.”

The exhibition statement for “Lick and a Promise” invites people to take a lick of a carrot on the wall. Each molded and flavored looking carrot is meant to taste like the color. After finding the right carrot to lick, one marks it with a red dot, so others are aware that one has been taste tested.

“I think this is probably one of the more ambitious shows that I think we’ve ever done,” Haslit said. “In terms that many traditional shows, the usual shows, everything is framed two dimensional things that come packaged, take them out of somebody’s trunk, and just get them up onto the wall. This has more media that required more problem solving.”

The show will run until Feb. 28 in the Nordstrand Visual Arts Gallery located in the Conn Library. 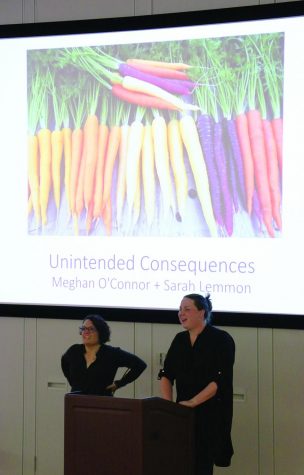