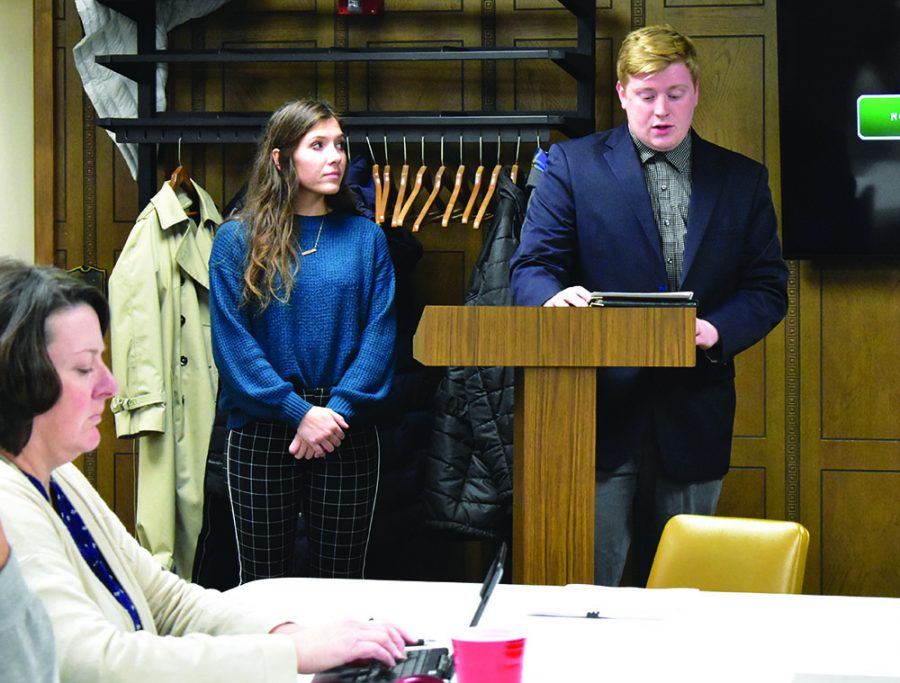 Senior Adam Smith, with the support of junior Kori Siebert, presents on behalf of the Civic Leadership at Wayne State (CLAWS) club to the city council.

Members of Civic Leadership at Wayne State, a club known as CLAWS, gathered at Wayne City Hall Oct. 29 to support the club’s president Adam Smith as he presented off-campus living concerns to the city council.

CLAWS supports the needs of off-campus living students in order to better their living while going to school at Wayne State College.

Students had difficulties with their landlords, so much that they needed immediate attention.

“We received stories about landlords harassing tenants, as well as some quid pro quo situations that were quite disturbing and needed to be addressed,” Smith said.

The city council members support concerns of those that live or work in the community to better the city of Wayne.

“The city helped us because they gave us an outlet and platform to voice our concerns,” senior Sarah Kreber said. “Plus, they have the power to help change and resolve the concerns. It was nice to be able to see everyone coming together and caring about each other to resolve the concerns.”

Dr. Teresa Morales, CLAWS advisor, reached out to the city mayor, Cale Giese, who then invited the leadership club to the city council retreat.

“We put out flyers and had a presence on social media and encouraged anyone that lived off campus that was experiencing difficulties doing so to come forward and share their stories,” Smith said.

“We received an overwhelming number of responses which we then chose from to form our argument to the city council.”

Smith said the meeting went extremely well and is confident with moving forward with the progress.

“We received a lot of feedback from different members of the council, and we will continue these conversations so that both landlords and tenants are educated about what their rights are when they sign a lease,” Smith said.

CLAWS gave the students living off campus an outlet to voice their concerns in an anonymous manner.

“Adam gave a voice to those who felt like they had none,” Kreber said. “Many students were not aware of what to do about the issues they are having. Allowing students to come together with the community to try and work together to solve this is a great thing. It’s just another testament to how Wayne State and the community work together and care about each other.”

Giese reached out to Smith after the meeting to go over with the city council members for review.

“The next steps will be continuing conversations with the city council and other city leaders to figure out some ways we can educate tenants about their rights and responsibilities when they sign a lease, as well as the proper courses of action they should take should a landlord fail to hold up their end of the bargain,” Smith said.

Smith said that the fight does not stop here, he promises that the issues the students face with living off campus will be fixed. 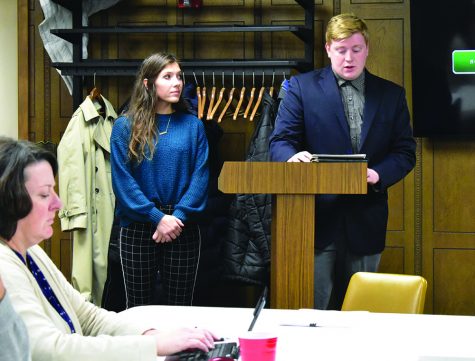 Brianna ParsonsSenior Adam Smith, with the support of junior Kori Siebert, presents on behalf of the Civic Leadership at Wayne State (CLAWS) club to the city council.