Volleyball goes 1-1 vs. Augie and USF

The #13 Wayne State volleyball team went 1-1 on the road this past week against Augustana University and at home against the University of Sioux Falls. WSC is now 19-5 overall and 9-5 in conference play.

The first game of the weekend, WSC lost to Augustana in 5 sets. Tarrin Beller led the way offensively for the Wildcats with 18 kills followed by Jaci Brahmer with 10 kills.

Augustana held the advantage in kills 60-55 over the Cats and a lead in assists with 56-54. WSC led the match in aces 4-3 and in digs 101-95. For the Cats, Redshirt freshman setter Rachel Walker led the way in assists for the Cats with 48.

Maddie Duffy had 21 digs in the match followed by Haley Kauth with 19. WSC had 19 errors and had a hitting percentage in the match of .197 compared to Augustana’s 31 errors hitting .144.

“It is always disappointing to lose, especially in a game that is that close but we cant hang our heads over that, we have to move on to the next game and put our attention and focus towards that team.” Haley Kauth said.

In the second game of the weekend, Wayne State swept Sioux Falls. Beller set the pace with 11 kills on the afternoon followed behind Kelsie Cada with eight and Katie Stephens with seven.

Hope Carter and Kelsie Cada had team highs for the Wildcats with 11 digs each. Walker was credited with 28 assists in the contest.

“We did some good things that we can carry onto our upcoming games which is exciting.” said Morgan Alexander “The overall connection and flow of our team is starting to become more and more present which is something that can’t be taught.” 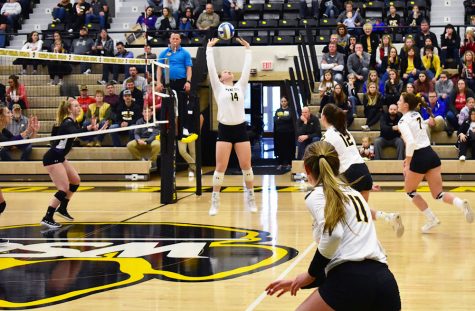 Brianna ParsonsJunior middle hitter Jaci Brahmer hits the ball in the victory against the University of Sioux Falls Cougars. The Wildcats outhit Sioux Falls in the sweep .225 to .101. The ‘Cats also held a 13-7 lead in blocks, led by Brahmer and Maddie Knobbe with 8 a piece. Brahmer is second on the team this season with 86 kills. 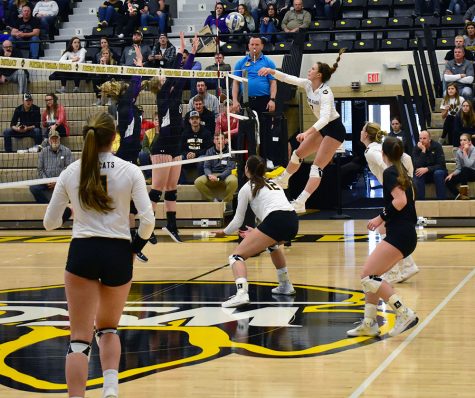 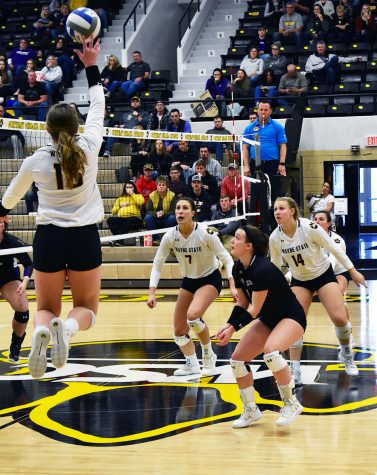