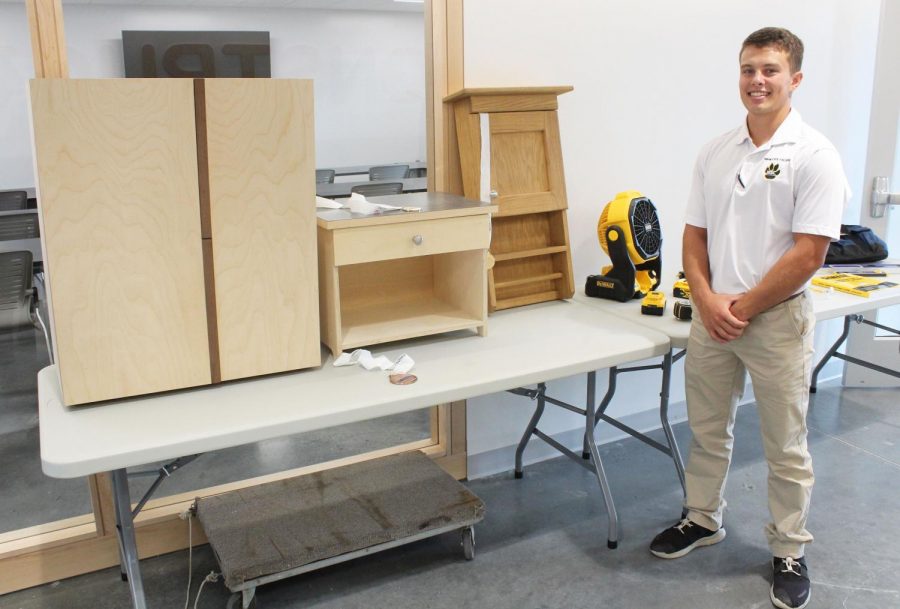 Wayne State College Student Derek Summers poses with his award-winning wood pieces. On top of being a student and competing with Skills USA, Summers owns his own business out of Norfolk called Summers Cabinetry.

Summers not only competes but he own his own business in Norfolk.

“I make kitchen cabinets for customers,” Summers said. “As far as it goes, I started off making cabinets because of my high school shop teacher. He got me going with it and that’s where I started.”

Greg Vander Weil, assistant professor and advisor for WSC’s Skills USA chapter, said as a freshman, Derek was encouraged to compete at the state contest.

“He has a great resume coming out of high school with his own cabinet shop,” Vander Weil said. “He won cabinet making his freshman year, went to the national contest, did very well. Second year he repeated as the state champion and went to the national contest and finished third in the nation. I am very proud of Derek a lot of the credit goes to his competitive desire and skills he brought to Wayne State. Derek is very coachable and takes advice from the faculty and makes good use of it and is a great man to work with.”

Vander Weil has been in the Skills USA organization for 38 years. He said there are a wide variety of competitions ranging from culinary arts to early childhood to criminal justice and robotics.

Summers said he and the people that are part of Skills USA taught students about career opportunities that are offered. The students learned about equipment for different careers and skills in construction, manufacturing, energy and transportation. Twelve schools attended and about 170 students and people from the industry attended.