Kolbeck proves that the clarinet is an expressive instrument

Article of the Week 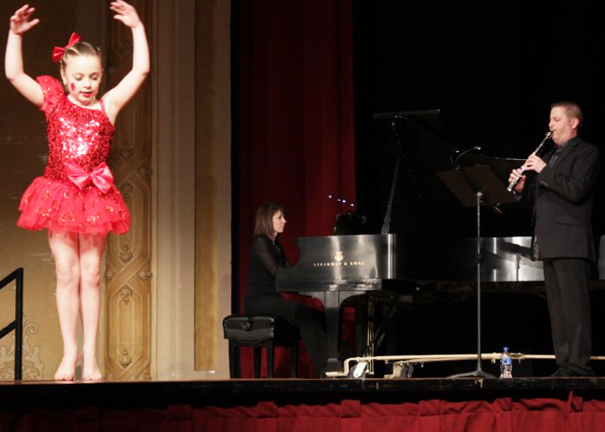 Dr. Karl Kolbeck held a concert this past week on campus where his daughter danced on stage while he played the clarinet. Kolbeck describes the clarinet as a very expressive instrument.

Dr. Karl Kolbeck is the associate professor of music. Kolbeck primarily teaches lessons in woodwind instruments: clarinet, saxophone, oboe and bassoon. He also teaches woodwind methods and pedagogy courses, and instrument repair. While he teaches, he also puts on recitals for students to enjoy.

“I began playing the clarinet when I was in the 5th grade, and have been playing now for a little over a quarter of a century,” Kolbeck said. “I was initially drawn to the sound of the instrument, I did, and still do, feel that the timbre of the clarinet can represent a wide spectrum of emotions, ranging from bright and cheerful to dark, melancholy and sorrowful.”

Kolbeck believes the clarinet is a very expressive instrument. He began playing the saxophone when he was in high school.

“I wanted to join the jazz band and clarinet is not a traditional member of a ‘big band’ jazz ensemble,” Kolbeck said. “My professional performing career really took off during my doctoral studies.”

Kolbeck has performed in various settings because as a clarinetist and woodwind-doubler.

“I have performed with professional Symphony Orchestras,” Kolbeck said. “As a ballet, opera, and musical theatre pit musician, with jazz bands, rock and blues bands, and as a backing musician for various rock, country, R & B, and other pop artists.”

He continues to do solo recitals regularly both on and off campus, and has performed at both national and international music conferences.

“I hope to inspire my students to become the best musicians possible,” Kolbeck said. “Regardless of whether they strive to be music educators, performers or just play for their own personal enjoyment; I strive to unlock their full potential and develop their skills as musicians.”
Kolbeck typically finds himself performing 40 to 50 times a year. He recently performed an on-campus clarinet recital on April 11 in Ley Theatre.

“As I was contemplating repertoire for this recital, I knew that I would have to be strategic, since the recital date fell at the end of a very demanding string of solo and chamber music conferences,” Kolbeck said. “Sometimes I try to find a central theme for music selected for a recital, other times not.”

Kolbeck felt the inspiration for this particular recital, was his youngest daughter, Khloe, who was playing with her toy dinosaurs one morning before she had to go to preschool.

“I walked in as she was sort of ‘growl-singing’ the Hokey-Pokey with her toy dinosaurs,” Kolbeck said. “This made me recall a piece of music purchased several years ago, but never performed, entitled ‘Dancing Dinosaurs.’”

From there he started thinking about other works that were along the lines of the “Dancing Dinosaurs,” and decided that he was going to do a recital in the interests of his daughters.

“As I often tell my students, you have to commit and sell it to the audience,” Kolbeck said.

The audience experienced his committing when he was preparing to perform.

“In the words of my five-year-old daughter, ‘T-Rex can do the Hokey-Pokey,’” Kolbeck said.

“My older daughter, Madison, was very serious about dance,” Kolbeck said. “There’s hardly a moment at home when she’s not dancing, whether it be practicing for competitions or just freestyle for fun.”

He said there has been more than one occasion where she dances along while he practices his instruments at home. With one of those occasions, Kolbeck came up with the idea to have her do an expressive dance while he performed a piece.

“I decided that the beautifully expressive work, ‘The Dancing Doll’ by Michele Mangani, would be the perfect piece of music to try and make this happen,” Kolbeck said. “We asked her dance instructor to come up with choreography to go along with this work.”

Along with the “Dancing Dinosaurs” and “The Dancing Doll,” Kolbeck also performed “Dance Music for Mr. Mouse.”

“When I first discovered this piece I usually buy pieces with interesting titles,” Kolbeck said.

Dr. Matt Haakenson read the animation for the song about a mouse falling in love with different female mice.

“She’s an incredible musician and played a huge role in the success of this recital,” Kolbeck said. 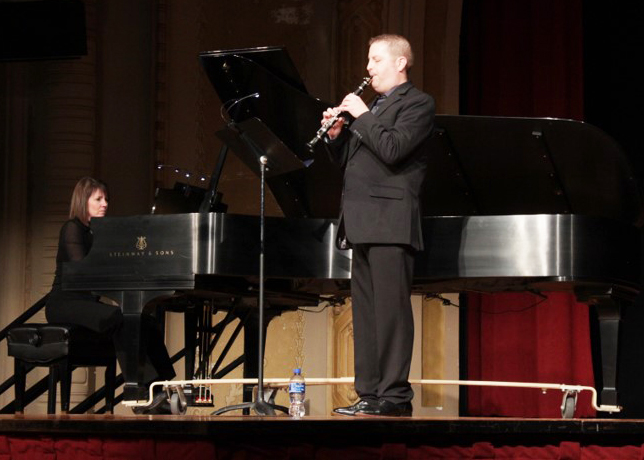 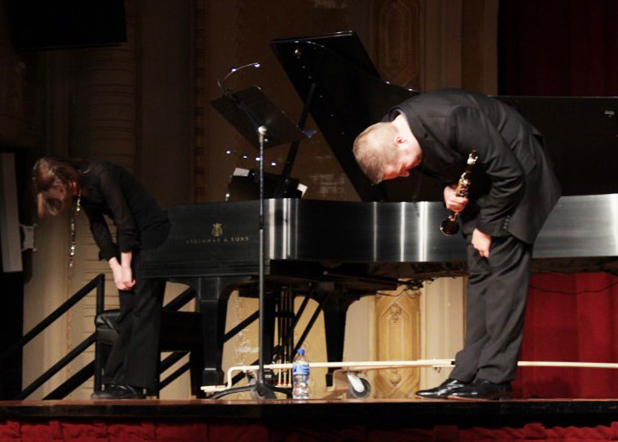