Director of player development for the Huskers visits WSC

Ron Brown spoke about his journey with Christ with CRU 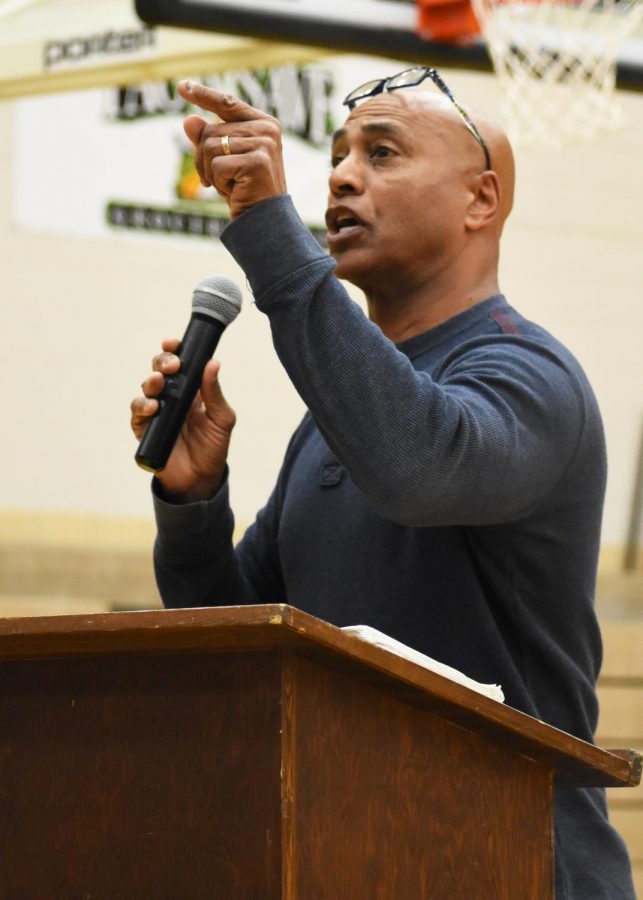 Ron Brown, director of player development for the Huskers shared his story about faith with members of CRU.

Ron Brown, director of player development for the Nebraska Huskers football team, spoke to Wayne State students and guests of CRU on April 11 in Rice Auditorium. He shared his story of Christ to send a message to the audience about the power of Jesus, how Jesus changed his life and how Jesus changes students lives.

“Well they need guidance; it is not just what career makes the most money or what is the career I feel the best way. Is there a way to take the love and gift that they have and mesh it with the gospel of Jesus Christ?”

For freshman Grace Bailey, Brown’s talk was very impactful. She feels closer to God now more than she did at the beginning of the school year.

“The point of ‘going in the wrong direction’ and God turning us around to the right direction,” Bailey said. “How he took the punishment for people going the wrong way, by dying on the cross for our sin. It reminded me of the song ‘Does Anybody Hear Her’ by Casting Crowns.”
Brown feels the love of Christ is what provokes him to want to pour out love to college students.

“You know, when you have been given a gift from the Lord, you love to offer it,” Brown said. “You can tell when you have a gift because even though it hurts that maybe someone did not want it, you never have a problem giving it. You are not going to stop giving your gift to others; that love is just going to keep on going.”

Brown’s life led him in a different direction than he thought it would. It impacted him in ways that always made him passionate about faith.

“I never knew my parents; I was a foster kid out of New York City,” Brown said. “Two people old enough to be my grandparents chose me to be their foster child, and went back and got a little girl who was not my sister, brought her back, and there was a whole bunch of other kids who all grew up as foster kids, [including me].”

Someone gave Brown life by being in the foster system; that was when Brown realized something more compelling than what he was already given.

“They gave me a new way,” Brown said. “When I became a Christian, I realized something more powerful than that happened, I was adopted by Jesus Christ. I was brought into the Father’s house; now I was his. My name changed, everything changed, just like when I got legally adopted, my name went from Price to Brown.”

“I would have loved to know my biological parents, brothers and sisters, but I got an even better deal: to know Christ and his family,” Brown said.

Throughout Brown’s journey as a Husker, he had to go through numerous amounts of bible studies and prayers to find the next step in his career.

“I was a player for a lot of years,” Brown said. “I played at every level with football. Finally, when football was over, I had just become a Christian and I was curious as to what God had planned for me. I kept asking myself, ‘God, what do you have for me?’ I prayed for God to give me some wisdom.”

All through God’s wisdom that he inaugurated into Brown; God called upon him to take a different path in his life.

“One day, one of my former coaches in college called me and asked me, ‘Why don’t you think about coaching? You could be good at it, and I was not sure, so I prayed about it. I got interviewed at my alma mater, Brown University; the coach hired me, and I’ve been coaching ever since.”
Inside and out, the life that God gave to Brown was a life where he could now spread the love of Christ through the athletes, fellow coaches, fans and media, and share the reality of it all.

“I think God put me in a place where just like he has done with you and with everyone else, in a place where he has wired us up for, he DNA’d us up to meet certain portions of the population with Jesus Christ,” Brown said.

To show the love of Christ, Brown can work closely with athletes and spread love by being a part of the sports field.

“I get to spend more time with bible studies and with players who want to do that,” Brown said. “I take players across the state to do sports clinics with middle school students, to share the Bible with them as well as their dads through the miracle of sports.”

Back in 1987, Brown was hired to be the director of player development for the Huskers football team, though he thought it was unlikely he would be hired.

“I was coaching at Brown University for four years; Coach Osborne was the head coach at Nebraska, and he reached out to hire me,” Brown said. “Someone had recommended me to him, and he was looking for a guy that was a Christian, cared about players, young, and who did not know that much, so he could be taught some good things.”

“I have been through four head coaches now and I even coached Coach Frost. He was one of the players when I was coaching, so it just shows how we can come full circle,” Brown said.