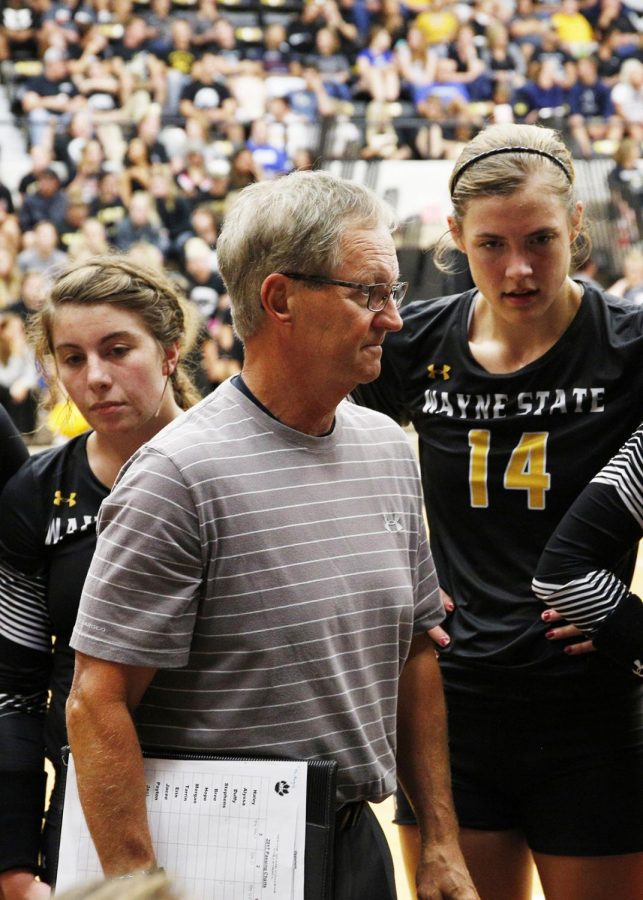 When John Petersen announced his retirement as Scotus Central Catholic’s head volleyball coach in 2014, he stepped down as one of the most decorated high school coaches the state has ever had. He spent 37 seasons at the helm of Scotus volleyball, leading the school to an unprecedented 15 state volleyball championships in 22 title game appearances. He also spent 23 seasons as the head basketball coach of the Shamrocks, retiring in 1999 and winning three state titles in that span.

It was not long after Petersen retired as a coach at Scotus, however, that he was offered an opportunity to be an assistant at Wayne State.

“When he (Jon) retired, Scott [Kneifl] jumped,” Marilyn said. “And why not? See what he wants to do. He has a lot to teach me. He thinks John was the volleyball god and he always looked up to him.”

“She might be exaggerating,” John added with a smile. “Coach Kneifl is really good too. And he and I would go to clinics at UNL and we went to Ames. So, we interacted a lot before that.”

Petersen has a coaching and teaching resume that is difficult for most people to live up to, including a National High School Coach of the Year Award in 2011. Before all his accomplishments later in life, it all started in a small town east of Sioux City.

Petersen grew up on a farm in Moville, Iowa and attended school at Woodbury Central. During high school, he enjoyed playing baseball and basketball primarily.

After graduating high school, Petersen attended University of Northern Iowa, where he majored in mathematics and minored in coaching. Ironically, Petersen did not plan to have a career in coaching volleyball despite all the success he had.

“They (UNI) didn’t have volleyball then,” Petersen said. “So you took classes in football, basketball, baseball and the other sports.”

After graduating from Northern Iowa, Petersen accepted a teaching and coaching job in Newcastle. He coached junior high basketball, helped with track, was the head volleyball coach for three years and took over as head basketball coach his last year at Newcastle, replacing Gary Puetz.

“I got into coaching because I was a sports nut,” Petersen said. “I can just remember when I was growing up I couldn’t wait to get home from school and read the sports section and I just loved it.

Petersen departed Newcastle for Little Rock, Iowa in 1976. At the time, Iowa did not have high school volleyball, but Petersen did not have any trouble keeping himself busy.

“I was athletic director, taught six prep classes and it was a load,” Petersen said. “I had two little girls and my wife [Marilyn] said there were times where I might not see my daughters awake because that was a big load, especially during basketball season because I had practice from 4:00 to 6:00 and 6:00 to 8:00 with alternating boys and girls.”

After a year at Little Rock, Puetz, whom Petersen spent a year with at Newcastle, gave him a call. Puetz had moved to Columbus to coach with his brother Jim at Scotus after spending the previous three years at Newcastle. He informed Petersen there was a teaching position along with a volleyball and girls basketball coaching spot, positions in which Petersen would have his work cut out for him.

“He told me at that time they weren’t very good,” Petersen said. “They had girls basketball the year before I came, and they didn’t win a game the first year they had it. And the volleyball team only won a couple games, so he told me it would be a great opportunity.”

Not long after Puetz’s phone call, John and Marilyn made the trip to Columbus for an interview at Scotus, where Petersen was offered the job on the spot. The two took about a week to decide whether it was a job he should take, and ultimately decided Columbus was a place they wanted to call home. Columbus had a population of about 17,000 at the time opposed to Little Rock’s 600, giving Marilyn various opportunities at finding a job of her own.

In Petersen’s first year coaching volleyball at Scotus, the Shamrocks went 8-7, a vast improvement from the previous year. Petersen, however, had to coach 60 high school girls on his own because of the short stint of his assistant.

“They had a young math teacher that was going to help me, and she didn’t know anything about volleyball,” Petersen said. “She did it for three days and said, ‘I can’t do this.’”

Petersen had an assistant in basketball, and the girls team went 3-13 during the ’77-’78 season – a step in the right direction after the previous year’s winless campaign.

Scott Miller, who was a sophomore at Newcastle when Petersen started there, came to Scotus in 1989 and was Petersen’s assistant in girls basketball for a decade. The Shamrocks appeared in the state championship game four years in a row in the ’90s and won the championship three times.

In 1999, after 23 seasons as the Shamrock head girls basketball coach, Petersen decided to call it quits.

“When he (Miller) left, I decided that was enough,” Petersen said. “I’d go from all the summer stuff and go until about March, and if you’re playing in the state tournament, you were playing in March. It just got to be a lot.”

From 1993-2006, Scotus appeared in 14 consecutive state finals. During that span, the Shamrocks won a state-record 115 matches, including undefeated C-1 state championship seasons in ’01, ’02 and ’03 before their win streak was snapped in the ’04 state championship game.

Petersen led Scotus to an undefeated state championship season again in 2011, the ninth time he led a team to an undefeated season. It also stands as the last year Scotus volleyball won a state championship. In 2012, Scotus finished as the C-1 runner up and in 2013, Petersen’s last year, the Shamrocks went 26-5 and appeared in the state semifinals. He finished his career with a record of 863-136, second at the time in wins to only Grand Island Central Catholic’s Sharon Zavala.

“I can say I’ve been about as fortunate as anybody can be,” Petersen said. “I can’t think of any place better to teach and coach than when I was there. The kids I had at Scotus were great kids and I just had so few problems. They always worked hard and were always extremely dedicated.”

Dating back to his first job in Newcastle, Petersen spent 40 total years in high school volleyball and 40 in basketball. He retired from teaching two years after his coaching retirement, marking the first time in more than four decades that he did not have a teaching or coaching job.

Petersen longed for more opportunities to golf, fish and enjoy his grandchildren after retiring from coaching in 2014, but still loved to teach.

“That’s when [Wayne State] coach Kneifl asked me if I wanted to help and I was kind of like ‘Scott, I just retired, why I would I want to do that,” Petersen joked. “So we talked, and I was still teaching at the time, so it was really tough to get up there a lot. But I went up there as much as I could, and I was usually at every home game and made a few road trips with them.”

Since Petersen retired as a teacher, he’s had more time to make trips up to Wayne (about an hour and 15-minute drive) for practice and has made a few of the longer road trips. The number of roundtrips he takes to Wayne varies every week, but sometimes Petersen says he has the chance to make four or five trips depending on the team’s practice schedule. He enjoys working with Kneifl and says the team has welcomed him with open arms.

Kneifl was originally from Newcastle and his parents were good friends of John and Marilyn’s. This relationship made the decision easier for Petersen to work as an assistant under Kneifl.

It goes without saying that Petersen still loves to coach, and he sees helping out at Wayne State as an opportunity to continue doing something he enjoys while also living a more laid-back life with more free time. He and Marilyn also have grandchildren in Omaha and they love having the opportunity to catch one of their occasional sporting events.

A couple years ago, Petersen started assisting the Scotus girls basketball team under head coach Jarrod Ridder. Last year, the Shamrocks won the C-1 crown, making it the 20th state title team Petersen was a part of at Scotus.

John Petersen enjoyed his early coaching and teaching days at Newcastle and Little Rock (Iowa), but a convincing phone call from Gary Puetz drove Petersen to Scotus and helped kickstart perhaps the most storied tradition in Nebraska high school sports. The insight and values Petersen brought to high school students for more than four decades is now something that the volleyball program at Wayne State gets to savor. And savor it, they will.