A walk in their shoes 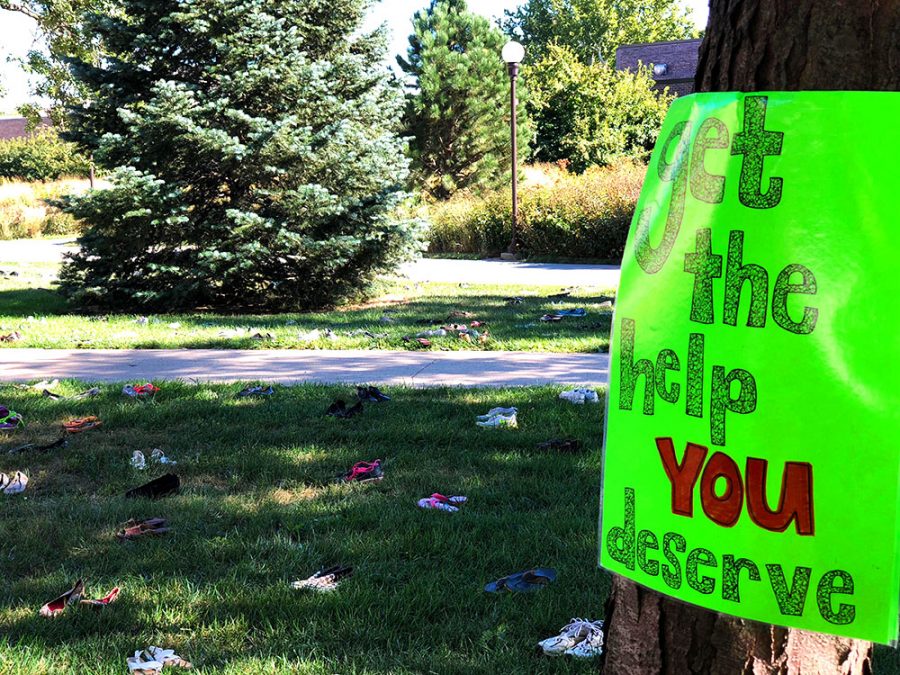 Outside Pile Hall, the “A Walk in Their Shoes” event took place Sept. 21 through 24, with 1,100 shoes laying in the grass representing each college student that died by suicide each year. They were displayed by the members in the Active Minds club.

“We started [the event] a few years ago because Active Minds national does another one called ‘Send Silence Packing’ and we did not have that kind of money, so we were like ‘Hey, why don’t we get 1,100 pairs of shoes and have the community donate,’” President of Active Minds, junior, Montana Hill said. “[A] bunch of people from our hometowns donated, and it was easier than we thought; it made more of an impact because you could visualize all the people [with the shoes].”

Throughout the year, the shoes were gathered up to be placed on the grass.

“We have a closet in Connell that we kept the shoes in and every year we had them in tubs and bags,” Hill said. “[They were] pre-counted and then we went out to set them up.”

“A Walk in Their Shoes” was set to evoke emotions from students.

“I thought a lot of people really reacted to [the event] because I remember when we were setting it up, someone asked what was happening, I explained, she immediately went silent,” Hill said. “It had a very powerful impact, you could see students walk past it and stand in silence for a bit.”

Hill said she has witnessed it many times before, but each year, it still gets to her.

“Even though it was our exhibit and I knew it was coming, I still got goosebumps every time I walked through it, because it was a huge visual,” Hill said. “1,100 college students were 1,100 too many, so it was cool to see how the other students reacted to it; they realized it was a serious issue and that this was affecting our age group along with our peers.”

Hill said Active Minds had their motto spread to everyone to make sure they knew that it was okay to have mental illnesses.

“I thought it was great that we did that because suicide, mental health and mental illnesses were definitely a taboo topic and there was just a heavy stigma associated with all of those things,” Hill said. “So, our motto was ‘It is okay not to be okay,’ so personally it opens people’s eyes that we needed to do something and that it was affecting our peers, our age group and people on this campus.”

Active Minds spread their message and motto physically all around campus.

“We had signs hung up that said, ‘It is okay not to be okay’ and the suicide hotline. We posted resources along with that,” Hill said.

Hill urges people to never be afraid to reach out. It does not mean weakness, it means being brave enough to ask for the help that people deserve.

“[Our Motto came to be] because we came up with it last year and so many people thought that when they had a mental illness that it defined them, but it does not, and it was okay to feel however you were feeling,” Hill said. “Even if you did not have a mental illness, it applied to every day life and mental illness, you had to allow yourself to feel emotions or you were going to keep them bottled up and that was not good.”

The meetings were informative for the members to know what was going on with the Shoe event.

“During the meetings, we asked all members to try and share the information on their social media pages to get the word about the shoes display,” Active Minds vice president Emmy Mills said. “Also, we asked them to gather as many shoes as they could for our display or for ones that could be donated.”

Writing on the sidewalks made it more of an attention getter for students to know more about mental illness, Mills said.

“The chalk was an impulse action, we found the chalk and thought it would be an excellent way to get our point across about stomping stigma and raising the conversation about mental illness,” Mills said.

The Mental Health Forum is correlated with Active Minds to let everyone know what the club does to spread mental awareness, according to Mills.

“During the Mental Health Forum, the shoe display is mentioned as one of the main events we do during the Fall,” Mills said. “Although, the forum pertains to a grant in connection with UNMC; where they monitor mental health in a rural college setting based on mental, physical and social wellbeing.” 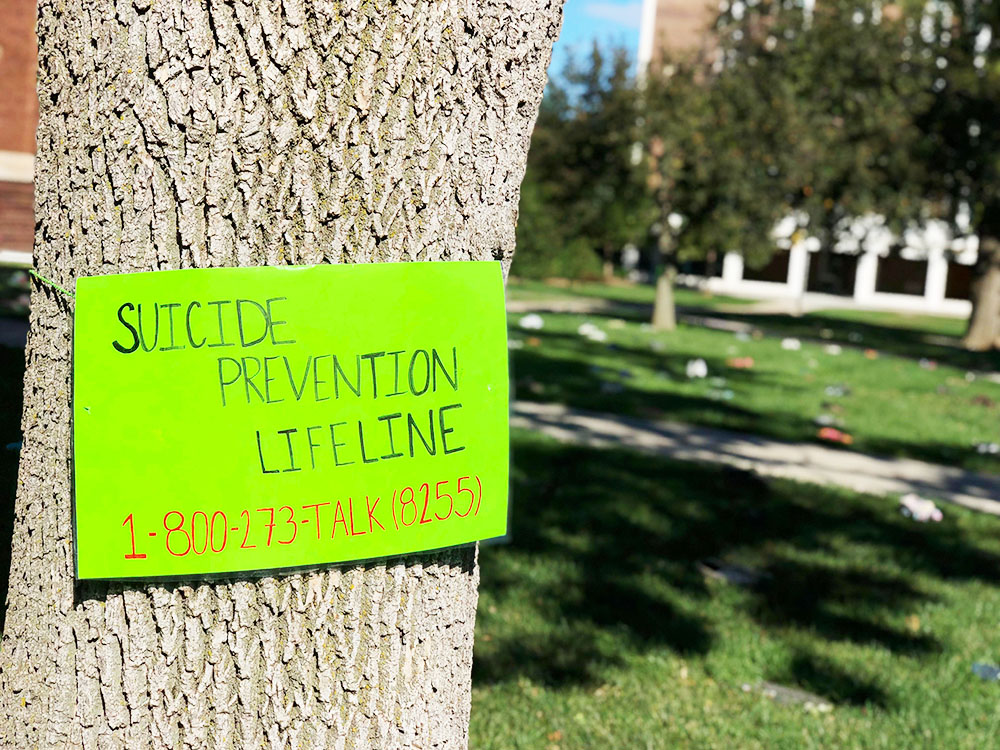 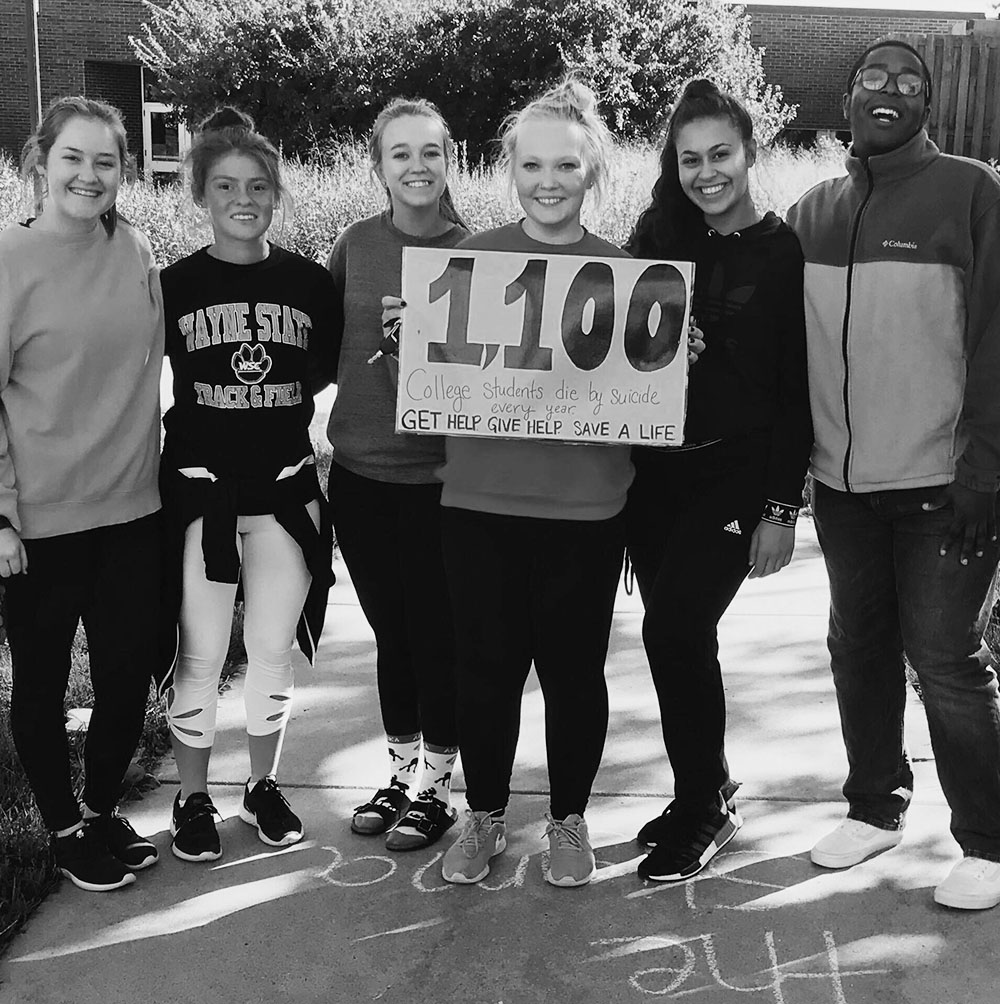