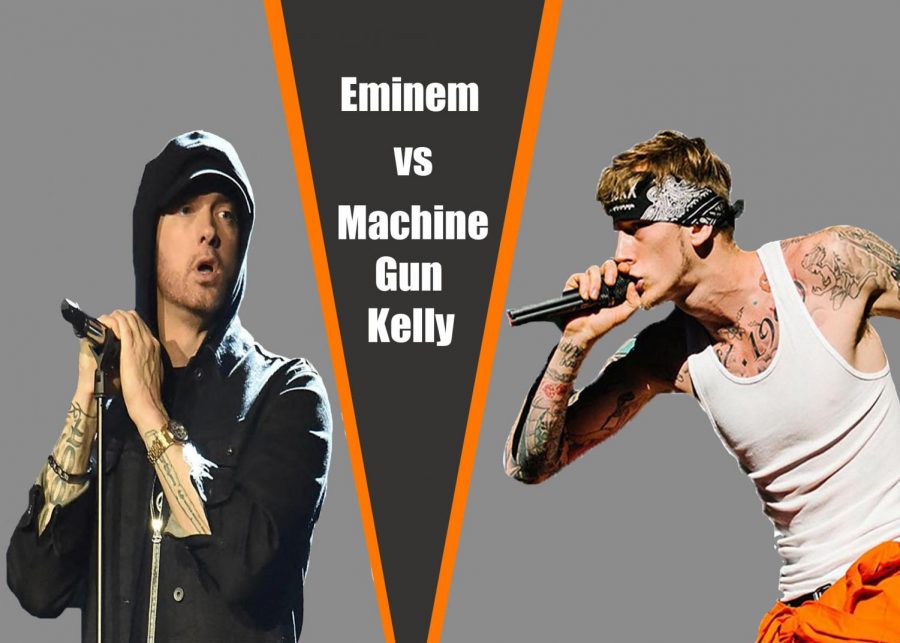 On Aug. 30, Eminem dropped “Kamikaze,” possibly the most controversial album of 2018. While he may have taken an “L” on his last album, Eminem reminds everyone that he is still the “Rap God.”

The release of his 10th studio album brought up his beef with rapper Machine Gun Kelly (MGK).

MGK tweeted about Eminem’s 16-year-old daughter, Hailie, in 2012. Kelly’s tweet said, “Ok so I just saw a picture of Eminem’s daughter…and I have to say, she is hot as ****, in the most respectful way possible cuz Em is king.”

MGK was 22-years-old when he posted the tweet that ruined any relationship between him and his idol. The tweet set off a feud between the two rappers, which has lasted six years.

On the first track of the album, “The Ringer,” Eminem goes off on rappers right off the bat. Eminem took the opportunity to call out new-generation rappers like Lil Xan, Lil Yachty and Lil Pump. “So finger bang, chicken wang, MGK, Igg’ Aza’, Lil Pump, Lil Xan imitate Lil Wayne,” Eminem raps. “I should aim at everybody in the game, pick a name.”But he also credits rappers Kendrick Lamar, Big Sean and Joyner Lucas. “If you ain’t Kendrick or Cole or Sean then you’re a goner.”

On “Not Alike,” Eminem sampled, what sounds like, the beat from Drake’s song “Look Alive” and dragged him, Migos, and MGK. A lot of fans are saying that “Not Alike” also sounds like a rip off of “Hi Bitch” by Bhad Bhabie, the “cash me outside” girl. He’s not just calling out Bhad Bhabie though, he’s mocking her and everyone who uses the same sound and flow.

Eminem uses a similar rhyme scheme as the chorus on Migos’ “Bad and Boujee.” “Raindrop (drip), drop top (drop top) Smokin’ on cookie in the hotbox (cookie).” He mocks mumble rappers like Migos, by naming random things that have no correlation to each other.

Eminem also calls out MGK about Tech N9ne’s song “No Reason” that came out in March. MGK was featured on the track and hid a diss to Eminem without calling him out directly. “To remind ya’ll you just rap and not God, and I don’t care who got bars.”

Eminem called MGK out by sayEminem restores six-year-old beef with MGK in his newest album “Kamikaze” By Kaitlynn Breeden, Staff Writer ing his name multiple times on “Not Alike.” “But next time you don’t gotta use Tech N9ne if you wanna come at me with a sub, Machine Gun,” Eminem raps. “And I’m talkin’ to you, but you already know who the f*** you are Kelly. I don’t use sublims and sure as f*** don’t sneak-diss. But keep commenting on my daughter Hailie.”

MGK responded to Eminem’s diss in his own track called, “Rap Devil.” His first bar is “Somebody grab him some clippers his f***** beard is weird.” I don’t know if this is directly why MGK put this bar in, but on Eminem’s song “Business” from “The Eminem Show” in 2002 he says “Til’ we grow beards, get weird and disappear. Into the mountains, nothin’ but clowns down here.”

And most recently on “Berzerk” in 2013, “Grow your beard out, just weird it out.” A big argument I’ve been hearing among my friends and people online is, “Why did Eminem wait six years to diss MGK on a tweet from 2012?”

Apparently, MGK doesn’t know either, because he mentions it on this bar: “Mad about somethin’ I said in 2012. Took you six years and a surprise album just to come with a diss.”

Eminem banned MGK from his SiriusXM radio station after he wouldn’t apologize for the tweet about his daughter.

“Let’s talk about the fact you actually blackballed a rapper that’s twice as young as you (let’s talk about it),” MGK rhymes in “Rap Devil,” “Let’s call Sway ask why I can’t go on Shade 45 because of you.”

Lyrically, I think this could be Eminem’s best album since “Relapse.” “Revival” was very political, which is why I don’t think it was very well received. In my opinion, “Kamikaze” is so much better than “Revival.”

When you listen to one song on “Kamikaze” it feels like you tried to process a whole album. The lyricism in this album is intellectual and incredible. It’s diss after diss and honestly you have to listen to each track a couple times to catch it all.

As much as I wanted MGK’s diss to be bad, it’s undeniably good. The feud isn’t over yet, because Eminem has yet to respond to “Rap Devil.” If he does, I’m sure it won’t be anything subpar, so MGK better get ready.