Volleyball team got a win and a loss last weekend 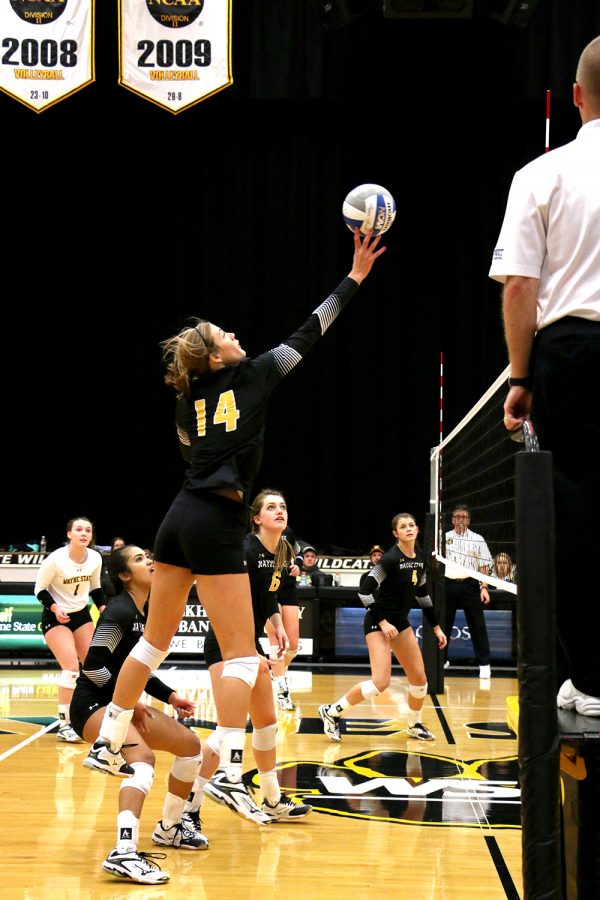 “Even though we came up short on Saturday, we played at a high level and as a team the entire weekend,” said senior Erin Gross. “We will just keep playing for each other and staying together as a team.”

In the final home game of the season, the ’Cats avenged an earlier loss in the season to St. Cloud by sweeping the Huskies Friday afternoon 3-0.

The Wildcats won the first set 25-17 after trailing early in the set 9-6. The ’Cats forced eight St. Cloud attack errors with help from a Haley Kauth service ace.

Gross had four kills with no errors on eight attacks to lead Wayne State while Katie Stephens and Kauth each contributed two service aces. Stephens led WSC with nine kills followed by Ballinger with eight and Gross with seven. Junior setter Megan Gebhardt dished out 31 assists in the sweep.

In the second game of the weekend, Wayne State faced No. 6 Minnesota Duluth falling in five sets 3-2 Saturday afternoon.

After an early 13-13 tie in the third set, Minnesota Duluth went on a run to win the set 25- 17, while forcing six Wildcat attack errors. The third set saw 12 ties and seven lead changes.

Wayne State came out early on top in the fourth set with an early lead 6-1. After several lead changes WSC held off the Bulldogs to win the fourth set 25-23. Beller, Brashmer and Gross each were credited with three kills in the set while freshman Maddie Duffy and Katie Stephens each had service aces.

“Despite the fact that we lost in five on Saturday, I thought we played an intense game and fought hard as a team,” said Brahmer. “Going into the conference tournament, we are going to continue playing hard every single point and take it one game at a time.”

Wayne State will play at Concordia-St.Paul in the first round of the NSIC Tournament this evening in a 6 p.m. contest in St. Paul, Minnesota.