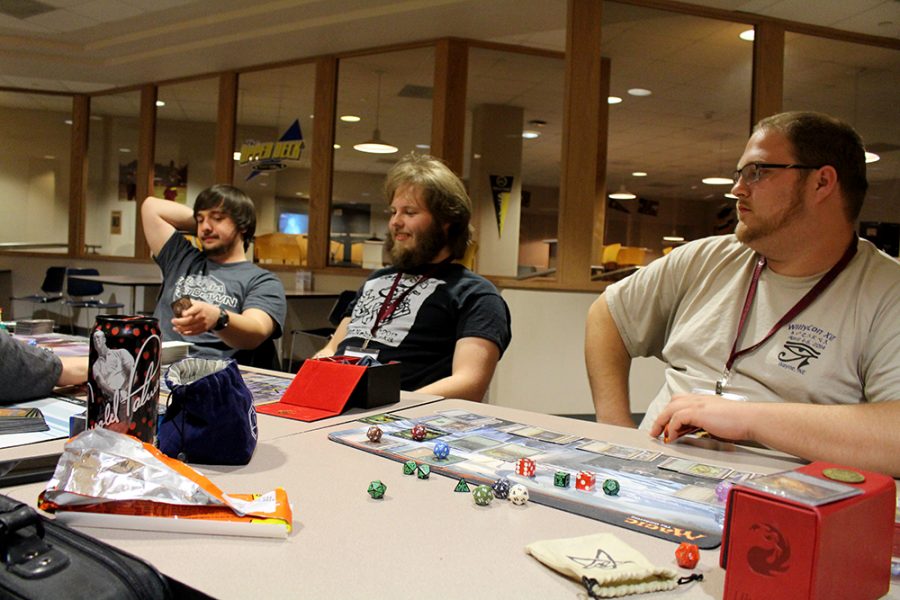 “My favorite part this year was the cosplay contest. We had over 40 contestants this year, all with stellar costumes,” president of the Science Fiction and Fantasy Club Landon Norquest said.

Norquest was the MC of the event and got the chance to introduce each of the contestants.

“I cosplayed as Jessie from Team Rocket in ‘Pokemon’, Happy from ‘Fairy Tail’, Shiro from ‘No Game No Life’ and I dressed as a dark fairy,” said secretary of the Science Fiction and Fantasy Club Natasha White. “Some cosplays I think are worth mentioning include one woman who dressed up as Ursula from ‘The Little Mermaid.’ Her costume was amazing.”

Many of the attendants of WillyCon cosplay some of their favorite science fantasy characters.

“Some of the events that go on are the opening ceremonies, where some of the members of the Science Fiction and Fantasy Club put on a skit based on the theme, a cosplay contest, the art auction and the charity companion auction,” said White. “That’s just a little sliver of the events that took place at the Con.”

At WillyCon there was a short-story contest, an art show, masquerade show, gaming, movies and more. There were panels based on Dungeons and Dragons and Pathfinder. These explained the games and gave people a chance to learn how to play them.

“This was our first year as a club planning WillyCon,” Norquest said. “Every year, our old adviser Ron Vick planned it all out, and we just staffed it, until he passed away. It was a very difficult process but a good learning experience.”

Featured at WillyCon was a voice-over workshop and a LARPing panel that was followed by a fighting tournament. The League of Legends club also hosted a league tournament.

“One of my favorite things about WillyCon is that it’s a smaller convention than Nebraskon,” White said. “There’s a great chance to connect with not only the people running and attending the Con, but also the guests of honor.”

The guests of honor at WillyCon this year were John Swasey, Luci Christian, Chris Mendolia and Mark Ervin.

“Normally at bigger conventions, the guests of honor don’t really get many chances to mingle with the fans outside of autograph sessions and panels that they host,” said White. “With smaller conventions like WillyCon, there’s less crowding, and the guests can interact and connect with their fans on a more personal level.”

Swasey is a professional actor, voice actor, sound director and script writer from Houston. He has written and acted for video games, anime and live-action movies. Christian is a professional actress from Houston who is known for her voice work. Mendolia knows a lot of information about technology gadgets and droids. Ervin is an artist from Nebraska.

“This year we had a movie play down at the majestic that our two main guests of honor were featured in,” Norquest said.

Next year will be WillyCon 20 and the Science Fiction and Fantasy Club expects to have a big conference to celebrate 20 years of the event.

“WillyCon is a great way for people to express their true selves,” White said. “Planning this event was a pretty big commitment, and I am very proud of everyone who stepped up to make this year’s convention a huge success.”