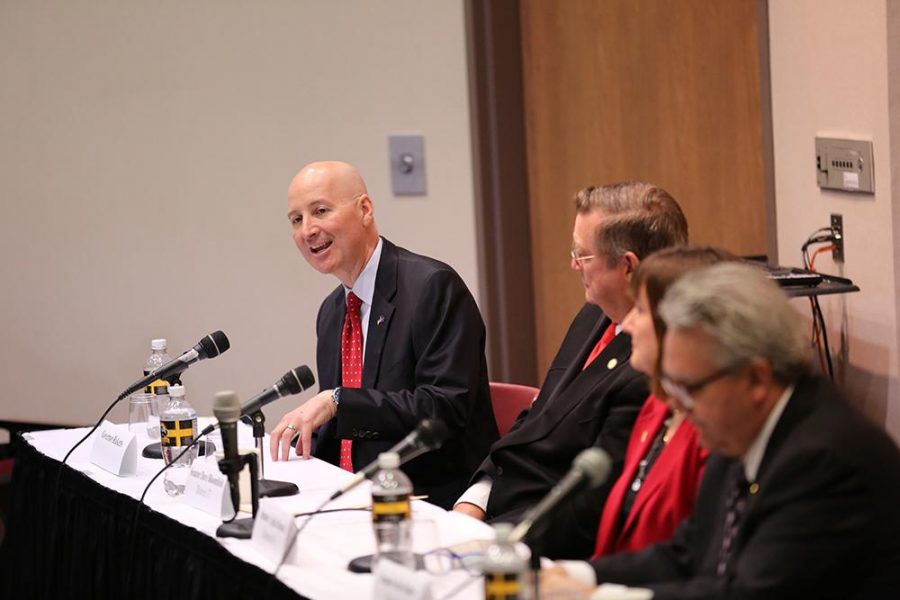 Governor Pete Ricketts was a late addition to the 25th annual legislative forum held at Wayne State College on March 4 in Gardner Auditorium.

Ricketts was joined by state senators Lydia Brasch, Dave Bloomfield and Jim Scheer, who all spoke to a full room.

They spoke on a plethora of topics including marijuana, carrying firearms, education and Sen. Scheer’s term coming to an end.

“We have a process to allow dangerous drugs like marijuana to be used for medical purposes. It’s called the FDA (Food and Drug Administration),” Rickets said. “It may not always work as fast as some people may like it to work, but that’s because they go through a very rigorous process to make sure they are safe and effective.”

Marijuana is still illegal at the federal level, so the states of Nebraska and Oklahoma are suing Colorado, where pot is legal.

Some issues brought up with marijuana were that it might hinder the cognitive growth of young people and has led to more drug trafficking with dealers underselling the government. All four politicians were against legalization.

All four speakers were split when they were asked about their stance on concealed firearms. The bill that was asked about had already been shot down.

“I have supported gun legislation in general. I think criminals will get guns, and I believe the Second Amendment gives us the right to protect ourselves,” Brasch said.

There was consensus that the Second Amendment is of great importance and individuals should have the right to own guns.

A bill has been proposed to change the NeSA test taken in eleventh grade with either the ACT or SAT. Statistically, NeSA has shown little to no value, since it neither helps nor hinders the students.

In the past six years, testing has shown that 20 percent more students from rural backgrounds and other areas are now entering higher education. Almost 75 percent of students have taken that test, but tests like the ACT and SAT are expensive.

Scheer emphasized the importance of education in particular, and he also mentioned how his term was coming to a close.

“Send someone down there that will represent you. The election closest to home is probably the one that’s going to affect everyone sitting here. Get involved in it,” Scheer said.

Scheer made a point of introducing the four individuals who could possibly take his chair and urged the audience to get involved and choose someone that could help the governor get things done.

Towards the end of the session, the politicians were asked if they were going to endorse any candidate running for president, and none of them made an endorsement.

“Everyone should care about politics. Politics affect a lot of things in everyday life. You might as well know something about it and use your power as a citizen to vote and edge your senators and congressmen in a direction you would like them to go,” political science major Michael Bogner said.