Another Plains Writers series and Poetry Slam in the books 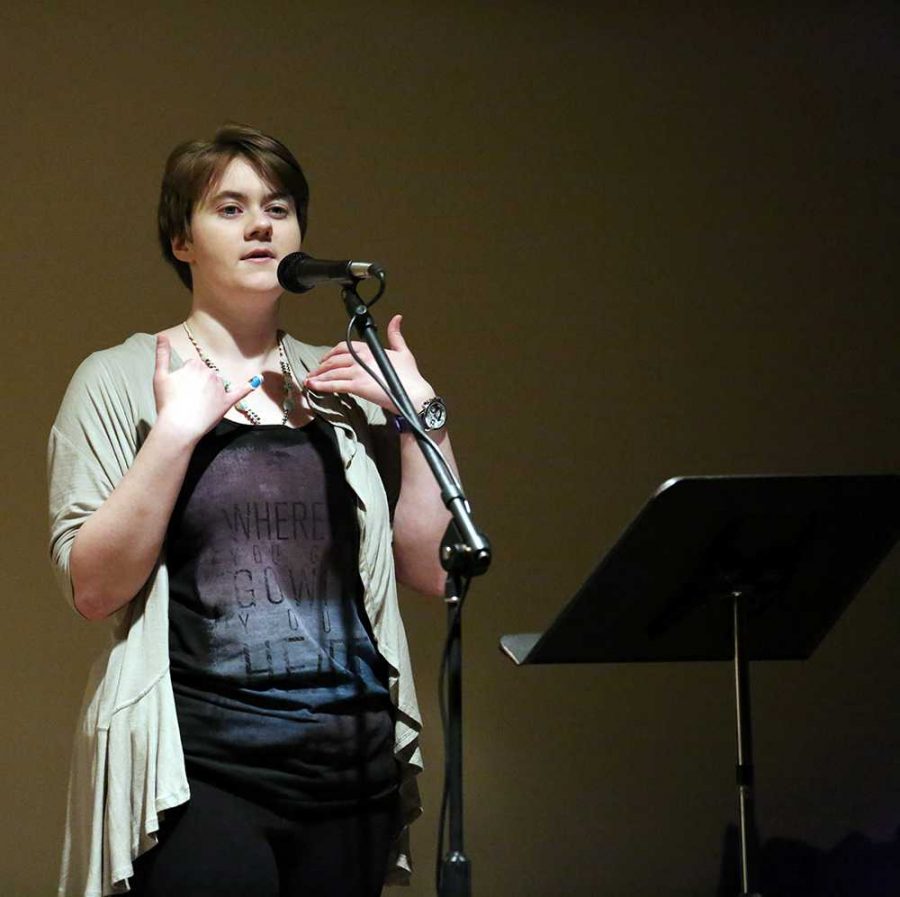 Kelly Weber, a graduate student, was named the Sacrificial Goat of the Poetry Slam. There were over 30 contestants who read poems about various topics.

At first blush, the Plains Writers Series sounds like a terribly dull event—sit in the Humanities lounge and listen to people (usually significantly older than us) read poetry or fiction or whatever.

In practice, the Editing for Publication class works very hard to avert that by digging up poets that are genuinely fun and/or interesting to listen to. Given the wide and exotic variety of subjects the authors touched on, I’d say that the organizers succeeded this year.

The first author to speak was Laura Madeline Wiseman, whose poetry wandered from pop culture shout outs to a gentle search for wonder in urban America to classical European folklore. It was honestly kind of strange, listening to poems go from mentioning “The Legend of Zelda” to contemplating why words with “male” in them are usually bad things (incidentally, the answer is basically that it’s a weird coincidence of language).

Her section was peppered with anecdotes of places she went and things she did while she was there while writing the poems, like when she went hunting for faeries in Walmart or when she participated in an Iowa-crossing bicycle event. Knowing the backgrounds of some of the poems helped to bring home what they were actually talking about, something which wasn’t always clear.

Up second was Todd Robinson, a repeat reader for the series and generally playful soul. His poetry mostly addressed growing up, both as a whole and in the Midwest, contemplating life in his own sort of gleeful reverence, and a bizarrely fun sendup to Allen Ginsberg.

He didn’t go as much into anecdotes as Laura did, mostly sticking to joking about the content of what he’d just read and what he was about to read. It helped to bring the mood up, feeling a lot more like we were at the Comedy Caravan than the Plains Writers Series, but he knew when to bring things back to seriousness.

The third reader was Steve Langan, who taught us all just how tense a room without applause can get. While his reading style is fairly solemn, the poems themselves ranged from sardonic to wistful. Of the three, he was probably the hardest to listen to but was good enough to hold the crowd in spite of that.

Langan prefaced each poem with a quick overview of what inspired it, but didn’t share much in the way of personal stories. One of the few he did share was a piece of advice he’d gotten from another writer, “Write the dumbest s*** you can.”

As any creative writer will happily tell you, it makes surprisingly good advice.

The slams are always grab-bags of subject matter and this year was no exception. Topics ranged from open-heart surgery to trips to Egypt to personal alienation to sunlight and gardens. You know, the usual.

Eddie Elfers and Vito Cole provided music before the slam started, pulling double duty as a comedy duo and musicians. Mostly it was Eddie playing straight man to Vito, but hey, it’s hard to be tense when a man is singing about pooping in a tuba.

Kelly Weber was the slam’s traditional “sacrificial goat,” taking the unenviable role of first reader and getting the judges warmed up for the event.